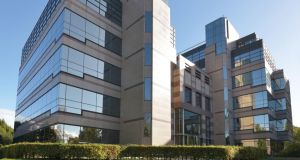 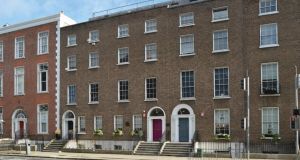 Numbers 86-88 Lower Leeson Street, a part of the Tara Collection, has been bought by Eric Kinsella of Jones Engineering for €11 million

Irish Life is to pay around €34 million for a substantial office investment in Ballsbridge, Dublin 4, which is expected to show a return of up to 7 per cent once it has been refurbished.

The 15-year-old Alexandra House in the Sweepstakes development had been owned by a syndicate headed by the late Liam May, one of the shareholders in Dundrum Town Centre.

Later this week Irish Life will also know whether it has been successful in pitching for two high-quality office blocks rented by Facebook at Grand Canal Square in the south Dublin docklands.

Hibernia Reit had made it into the second round of bidding but did not put in a final offer after failing to enlist a partner.

With the two Grand Canal blocks for sale as a pair or separately, selling agents JLL and CBRE had set strong guide prices of €102.2 million for number 4 and €113.8 million for number 5. The final figure is expected to exceed €220 million.

The two blocks, as well as a third adjoining building sold last summer to Irish Life for €121 million, were developed by Joe O’Reilly’s Chartered Land which also holds a majority stake in Dundrum Town Centre. Nama is overseeing the sale of these and other investments held by Chartered Land.

Another office investment in the collection, 86-88 Lower Leeson Street, has been sold to Eric Kinsella of Jones Engineering for €11 million while a modern office block at One Grand Parade, overlooking the Grand Canal in Dublin 6 has also been sold to an undisclosed buyer for over the €16.4m guide price.

Irish Life has every reason to be happy with its purchase of Alexandra House, one of the office buildings developed on the former Sweepstakes site. The €34 million selling price for the 5,318sq m (57,250sq ft) block equates to a capital value of €6,404 per sq m (€595 per sq ft) even before the 90 on-site car parking spaces are taken into account.

The Bannon agency, which advised Irish Life, is also the letting agency on the adjoining block at 2 Ballsbridge Park, where a significant letting is due to be completed shortly at a rent of over €37 per sq m (€40 per sq ft).

The ground, first and second floors of Alexandra House are let to serviced office provider Regus at an overall rent of €800,000 per annum. The lease has around ten years to run.

The third, fourth and fifth floors with an additional 2,489sq m (26,714sq ft) of space are expected to attract a top rent when refurbished by Irish Life at a cost of little more than €2 million.

Three of the floors are let at a rent of €168,702 under leases which are due to run until June 2016. Mr Kinsella, who was advised by agents Browne Corrigan, is expected to extend and refurbish the building before putting it on the letting market.