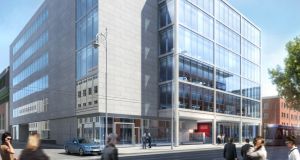 The fast-expanding property fund IPUT is to forward-fund a new €80 million office building in Dublin’s IFSC.

The Cosgrave Property Group is to handle the development after agreeing to sell a dated office block on the site to the fund for €25 million.

A planned Grade A specification finish including a LEED gold energy rating will be the only one of its kind among the original office buildings in the IFSC.

IPUT stands to benefit from a 6 per cent income yield once the block is completed by contractors John Sisk & Co in September, 2017. The promoters plan to have the building ready in advance of most of the other new office developments under way in the city centre.

The Exchange will be located next to CHQ and George’s Dock, fronting on to the Luas line and within five minutes’ walk of the Dart and railway services at Connolly Station. The other major traders in the same area include Citigroup, KPMG, Wells Fargo, JP Morgan, SIG and Zurich. The deal between IPUT and Cosgraves was negotiated by Savills and JLL, respectively and both will also serve as letting agents.

IPUT has been one of the most active investors in the docklands in Dublin over the past four years, paying about €300 million for more than 500,000sq ft of office space. Its acquisitions include 1 Grand Canal Square, a 120,000sq ft block let to HSBC and Accenture, which cost €93 million.

This early phase of the IFSC has matured exceptionally well, helped by vibrant retail and leisure uses alongside global financial companies. Peter Cosgrave of the Cosgrave Group said that when completed The Exchange would be one of the finest office buildings in Dublin with the specification and flexibility to meet the exacting needs of both global and domestic office occupiers.

There have been widespread changes in the IFSC and the docklands generally since the property crash.

Many of the distressed sales have been made by syndicates which originally benefitted from tax breaks but more recently found their investments had lost considerable value and were no longer viable.