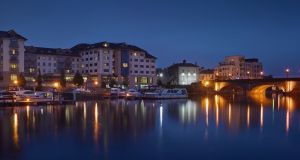 Radisson Blu in Athlone: The hotel was put up for sale last September with market sources expecting it to go for about €6.5 million. Photograph: Will Pryce

The four-star hotel sits on the edge of the Shannon and is opposite Athlone Castle. Purpose-built in 2004, it was previously managed by the Galway-based Earls Holdings until Ulster Bank appointed Kieran Wallace of KPMG as receiver in 2012.

The hotel was put up for sale last September with market sources expecting it to sell for about €6.5 million.

“This latest transaction in the provincial Ireland hotel market shows again that there is very strong demand for well located, modern and profitable hotel operations in the larger provincial centres and especially those regional centres like Athlone, that are within easy reach of Dublin and Ireland’s other major cities,” said Dermot Curtin of selling agents CBRE.