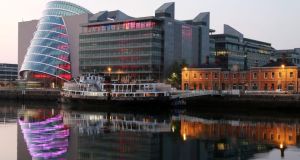 One Spencer Dock: overall rent is reported to be in excess of €11 million per annum. photograph: nick bradshaw

The long delayed sale of Ireland’s largest single office investment is finally to proceed after the front bidder, Hines, enlisted the support of German pension funds to buy the PwC headquarters at One Spencer Dock on Dublin’s North Wall Quay.

The US property dealer, which has fronted several significant property acquisitions in the Dublin area in recent years, is currently working its way through legal formalities with the intention of signing a contract to purchase the investment for €242 million within two or three weeks. In the meantime, two other international bidders are reported to have notified selling agents CBRE and Savills of their interest in the investment which when sold will show a return of around 4.6 per cent.

Hines is one of the largest investors in the Irish market, having joined forces with HSBC Alternative Investments (HAIL) to buy a 72.8 per cent stake in Dublin’s Liffey Valley Shopping Centre for €253 million. Hines also teamed up with King Street Capital to acquire a 400-acre site beside Cherrywood Business Park in south Dublin for more than €280 million.

The nine-storey over basement PwC office complex is the most spacious in the city with an overall floor area of 21,054sq m (226,624 sq ft).

The river-front offices, developed by the now defunct Treasury Holdings, have three interconnecting blocks which are rated among the best in the city. The office space is let to PwC under 25-year leases which provide for upwards-only rent reviews every five years. The leases have more than 15 years to run. The overall rent is reported to be in excess of €11 million per annum – equating to close to €538 per sq m (€50 per sq ft).

Several other major office blocks planned for the same area of the north docklands will be expected to achieve even higher rents. Sean Mulryan’s Ballymore Developments and the Singapore company Oxley are to develop more than 50,000sq m(540,000sq ft) of offices and 25 apartments at North Wall Quay. In the same area work is proceeding on the completion of the new Central Bank headquarters.