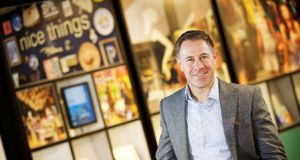 Simon Betty: He joined Hammerson in 2006 and has worked across a variety of corporate finance and strategic positions

UK-listed property group Hammerson has appointed Simon Betty as its retail director for Ireland, following its acquisition recently of the Project Jewel loan portfolio from the National Asset Management Agency.

Mr Betty is currently Hammerson’s director of corporate development and will relocate to Dublin in the new year to head up its Irish office, which is in the process of being established.

He joined Hammerson in 2006 and has worked across a variety of corporate finance and strategic positions, including playing a role in the reorientation of the business to become a retail specialist.

Most recently, he helped to establish Hammerson’s new headquarters in King’s Cross, London, and worked on a number of its key retail regeneration projects.

On September 29th, Hammerson announced that it had agreed to acquire Project Jewel in partnership with Allianz for €1.85 billion. Hammerson’s share of the purchase price amounted to €1.23 billion. The portfolio related to loans held by Joe O’Reilly’s Chartered Land and were connected with the Dundrum Town Centre and its neighbouring village centre, the ILAC Centre, the Pavilions in Swords, and a development site bound by O’Connell Street and Moore Street in central Dublin.

It is understood that Hammerson is seeking to reach a consensual arrangement with Mr O’Reilly to take control of the assets that underpin the loans it acquired from Nama.

1 Brother is dragging his heels as executor of uncle’s will - is there anything I can do?
2 Apple tax case: Four individual lawyers paid over €500,000 each
3 Thailand attempts to lure travellers with luxurious lockdown options
4 Should my mam wait for house prices to drop before buying?
5 Irish whiskey sales near milestone of 12m cases a year
6 Hangover for the drinks sector as pint sales go flat
7 Covid-19 mortgage breaks: What’s the catch?
8 Stocktake: Has Warren Buffett lost the magic touch?
9 ‘The recovery needs to be a full-scale economic renewal’
10 How to . . . move (almost) everything to your new phone
Real news has value SUBSCRIBE