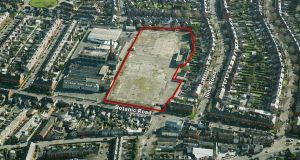 The 2.02 hectare site on Botanic Road in Glasnevin, Dublin 9, where 119 homes are being constructed

Work is expected to begin shortly on the development of 119 homes on Botanic Road in Glasnevin, Dublin 9.

The 2.02 hectare (5 acres) site formerly occupied by Smurfit printworks has been acquired by Dublin-based Eastwise Homes which plans to have the new homes available by the end of the year.

Eastwise recently bought the site from an Irish subsidiary of the Westhill Land & Property UK Ltd for a price believed to be close to €18 million. Westhill is understood to have made a substantial profit on the five acres having previously bought the southern half of the site during the property crisis in 2013 for €4.5 million. The Lisney estate agency, which handled the recent sale, said it would not be commenting on the transaction.

Rita Dattani, a director of Westhill, described the sale as “a positive transaction for both parties”. She said that in addition to the Dublin project her company had assembled a significant portfolio of land in Ireland “which we are keen to develop into housing.”

A press release from the company said it had either secured planning permission or was in the process of getting approval for 800 homes.

The Botanic Road development will include 43 three-, four- and five-bedroom houses as well as 76 apartments: 17 one-beds, 42 two-beds and 17 three-beds. Lisney told builders interested in the site that another 19 homes may also be approved because of new regulations adopted by Dublin City Council. The site faces Botanic Road and is between Iona Road to the south and the former John Player cigarette factory to the east.

1 Oxford Covid vaccine trials offer hope for elderly
2 Ulster Bank to introduce new card payment controls on app
3 Hurrah for the companies giving staff more time off
4 Sustainable investment: How your pension can help tackle climate change
5 RTÉ to seek 70 voluntary redundancies as ‘large costs’ beckon in 2021
6 Apple planning updates to its AirPods earbuds next year
7 How much state pension will I get next year?
8 Some Irish money market funds came close to danger in March
9 Start-up Loanitt raises €570,000 as it looks to double headcount
10 How long can Government afford to keep State pension age at 66?
Real news has value SUBSCRIBE