AIB to move support staff to Leopardstown in Dublin 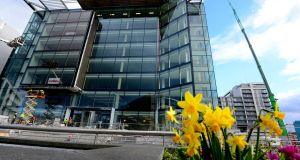 Allied Irish Banks has settled on a newly-completed office building at Central Park in Leopardstown, Dublin 18, to accommodate more than 500 support staff who have been based in a variety of locations on the city.

Agent Cushman & Wakefield, which advised AIB, said it would be “premature to comment at this stage”.

Agreement on the letting comes days after Facebook also found additional office space in the city for its fast-growing workforce. It plans to rent more than 9,290sq m (100,000sq ft) in Beckett House on East Wall in the north docklands which has remained unoccupied since it was developed about a decade ago. The complex was bought about six years ago by the Comer Group at a knockdown price and once refurbished will be rented to Facebook at €258 per sq m (€24 per sq ft).

The Green Reit letting will be seen as an important endorsement for Central Park at a time when Green Reit will be reviewing its options to develop further office blocks with an overall capacity of more than 400,000sq ft. The extensive development opportunities follow the company’s purchase of the 50 per cent stake in the park it did not own for a figure reported to have been about €155 million. Green and its then joint venture partner Kennedy Wilson bought the park early in 2014 for €310 million, with Green taking possession of the offices and Kennedy Wilson assuming ownership of the apartments and further development land.

AIB has been renting a range of secondary office premises in recent years after selling four dated three- and four-storey blocks at the front of the Ballsbridge Bank Centre just before the property crash. It later withdrew other staff from the AIB Treasury Centre at the front of the IFSC and availed of vacant space in Hume House, close to its Ballsbridge HQ, and other city locations to accommodate staff. Hume House was recently acquired as an investment by Irish Life which is now expected to either upgrade it or demolish it and replace with a larger block. The new Sandyford building will be ready for use by the bank in about three months once it has been fitted out.