Former HMV store on Grafton Street for rent at €1m 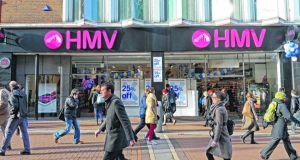 Zara owner Inditex is expected to be high on the list of international fashion traders to be targeted by agent Savills when it launches a marketing campaign later this week to find a replacement tenant for HMV in one of the best-proportioned stores on Dublin’s Grafton Street.

The rent for 65/66 Grafton Street has been reduced from €1.7 million to €1 million to attract a top brand like Zara sister company Massimo Dutti, which specialises in a higher-cost offering for men and women.

If Inditex opts to rent the store it is likely to choose Massimo Dutti as the tenant rather than Zara, which already has a shop around the corner on South King Street, as well as one on Henry Street and in Dundrum Town Centre. Massimo Dutti’s only Irish outlet is in Dundrum, where it trades exceptionally well even in the difficult economic climate.

Inditex is the largest retail fashion group in the world by sales with more than 6,000 stores across 86 markets.

The drop in Grafton Street rents by up to 52 per cent – highlighted in the recent High Court case relating to Bewleys cafe – may well prompt inquiries as to why the rent on the former HMV store has not been adjusted down in line with the general fall on the street.

However, Simon Cooper of Savills said 65/66 would attract a premium rent as it was easily the finest store on Grafton Street to have come on the letting market in years.


Other contenders
Other fashion contenders for the property may well include Gap and Nike, which are opening out-of-town stores at West End in Blanchardstown, Dublin 15. Banana Republic and Mango may also show interest in the store as well as H&M, currently based on the much quieter South King Street.

British chemist multiple Boots is likely to take a close look at the store following its announcement that it is seeking a flagship outlet in the city centre. Its existing shop on Grafton Street has considerable size restrictions.

The Irish Property Unit Trust holds a 60 per cent stake in the former HMV building, while the balance is owned by Aviva.

Savills is also marketing a planned new store a short distance from the former HMV shop. It will become available when two adjoining buildings are amalgamated to provide about 743sq m (8,000sq ft) at ground- and first-floor levels.

The new development at 57/58 Grafton Street will replace Zerep and Richard Alan and is expected to attract a rent of about €750,000. Nama has committed to funding the merging of the two buildings, which were originally bought by developer Bernard McNamara.