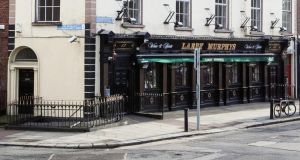 The ESB has bought Larry Murphys bar at Lower Baggot Street, Dublin 2, in advance of the planned redevelopment of its controversial headquarters on the adjoining site at Lower Fitzwilliam Street.

The State company is understood to have paid slightly over €1 million for the bar which has been popular with rugby fans over the years. The business has been run by the Finnegan family for the past 40 years.

“From time to time ESB purchase properties that may have a strategic value to us. We are engaged in a process with this particular building which we are not in a position to comment further at this time,” said a spokesman for the ESB.

The State company is planning to replace the modern precast concrete building used as its headquarters with a “reinterpreted” Georgian building to restore the Georgian mile it destroyed in the 1960s.

John Hughes of CBRE, who handled the sale of Larry Murphys, said there was considerable interest in the bar from both publicans and investors after businessman Larry Goodman acquired the nearby former headquarters of the Bank of Ireland.