Dublin residential investments overtook all others in Q2 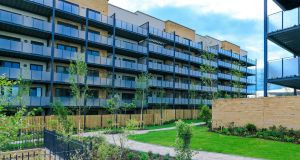 Activity in the residential investment market in Dublin – essentially build-to-rent – was larger than the office and retail sectors in the second quarter of 2018. This according to a new report from Hooke & MacDonald, which claims this remarkable performance is the first time that transactions in the residential market have overtaken all other investment classes.

However, while residential accounted for 42 per cent of the investment market in the second quarter (followed by offices at 27 per cent, retail at 24 per cent and mixed-use at 7 per cent), it was second to offices over the first half of the year.

The residential investment market has grown strongly since 2016, when the sector opened up on the back of a shortage of rental accommodation and rising population levels. It constituted just 6 per cent of the Dublin investment market in 2016, rising to 17 per cent in 2017 and now standing at 24 per cent over the first six months of 2018.

According to research by Colm Lauder of Goodbody, growth in the Irish residential investment market reflects international trends. In recent years residential as a percentage of institutional real estate portfolios has grown from 3 to 7 per cent in the UK and now stands at about 25 per cent in the US and 12 per cent in France.

According to Hooke & MacDonald, transactions in the Dublin residential investment market amounted to €294 million in the second quarter supported by eight large deals. Some 90 per cent of these transactions were in the build-to-rent sector.

The largest deal was Irish Life’s purchase for about €120 million of 262 apartments at Fernbank in Churchtown, Dublin 14. Carysfort Capital splashed out about €101 million on 120 apartments and two retail units at 6 Hanover Quay in the south docklands, while Ires Reit spent €40 million on 128 apartments at Hampton Wood in Finglas.

Meanwhile, some significant assets are for sale. At The Grange in Stillorgan, for example, 274 apartments and a highly rated 4-acre site for an additional 263 apartments went on the market in April at €135 million. These are understood to be under offer for about €160 million.

Hooke & MacDonald is quoting €80 million for the 216 apartments being developed by the Cosgrave Property Group at Santry Demesne in Dublin 9, due to be completed by the end of 2019.

“The private residential sector is the most vibrant part of the Irish investment market with considerable potential for sustained growth over the next five years,” according to Hooke & MacDonald. “This is underpinned by strong demand for product, a shortage of supply, a rising population and a positive economic outlook. Yields are consequently trending downwards.

“The cost and availability of sites for apartment developments, coupled with planning delays and other delivery costs, are significantly constraining factors in the supply of residential accommodation. There is a shortfall of about 150,000 apartments in Dublin based on demographic requirements and housing stock as institutional investors are playing a significant role in bringing supply to the rental market.”

The agency also claims that more than 30 per cent of Dublin’s population is now in rental accommodation and suggests this is likely to rise to more than 40 per cent over the next five to seven years.