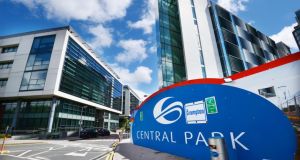 Kennedy Wilson completed 36 lettings at its Vantage apartment development at Central Park in Leopardstown in the quarter, and it continues to “drive rental growth”.(Photograph: Alan Betson / THE IRISH TIMES )

Prime rents for Dublin offices are on track to reach new highs over the next two years, property investment company Kennedy Wilson said on Thursday, as it gave an update on its European portfolio.

“We expect our Dublin office portfolio to be a strong beneficiary as market evidence for large occupiers becomes more prevalent,” the investment company said, in a trading update for the first three months of the year.

The group’s total portfolio at € 2.bn at end-Q1 across 259 properties and four loan portfolios, with just ten properties representing 34 per cent of the value. Some £564.9m of acquisitions were completed in the period, reflecting a blended yield on cost of 7.1 per cent. It increased its quarterly dividend by 14 per cent to 8 pence per share.

Fifty per cent of the group’s top assets by value are in Dublin, with the rest spread across the UK, and its top tenants include Bank of Ireland and Mason Hayes & Curran.

At the group’s Vantage development in Central Park, Dublin, where it has 274 apartments, it completed 36 lettings in the quarter, and it continues to “drive rental growth”.

Kennedy Wilson said it is making “significant progress” on the development of 166 new units in Block K, with construction already at floor five out of a total of 11 floors. It expects to complete the development by the second quarter of 2016.

On Baggot Street, where the group acquired the 91,600 sq ft Opera portfolio, final planning permission has come through, allowing for a larger floor space.

“This considerably increases the potential value of the development.” Kennedy Wilson said, and it remains on track for comletion by Q2 2016.

Also in the Opera portfolio is Stillorgan Shopping Centre in Co. Dublin. The property investment company said that it is targeting submission of a planning application at the end of Q2-15 to “reconfigure part of the centre, improve the façade, canopy and car park configuration”. The centre will remain open while development works take place. Its letting strategy is to renew and extend leases for two-three years whilst development works are ongoing.