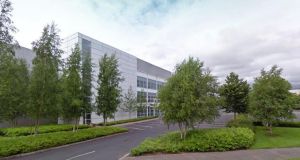 The deal to purchase Millennium Park, near Naas in Co Kildare, was one of the biggest land deals in the pre-crash years.

On December 1st, KPMG’s Patrick Horkan was appointed as liquidator to Osberstown Developments, a company the trio had used to purchase Millennium Park, the high-profile office and development site near Naas in Co Kildare.

It was one of the biggest land deals in the pre-crash years, with the trio paying about €312 million in 2006 to acquire more than 400 acres of offices and land suitable for development.

It was then sold by the National Asset Management Agency in mid-2015 for about €36 million to investors headed by Tetrarch Capital. They weren’t quite like-for-like deals but the haircut involved was nonetheless hefty.

Horkan has been given the task of administering the last rites to Osberstown Developments.

Considine, Sweeney and Prendergast have since dusted themselves down and are pursuing a residential development at a 22-hectare Tipper Road, Blessington Road in Naas.

It comprises 395 two- and three-storey houses, and a 1,978sq m neighbourhood centre that would include a creche, a cafe and a gym. Each house would have two car-parking spaces with 50 spots for visitors and spaces for the commercial units. The development would likely cost north of €100 million.

It was granted planning permission by Kildare County Council last September, subject to a number of conditions. But it has since been appealed to An Bord Pleanála by a number of parties, including two residents’ associations. Many locals are not happy with the location or scale of the development.

The application is being pursued by PTG Partnership, which was registered in 2013 by the three businessmen. It has not filed any documents with the companies office since registering its business name in August of that year.

Ironically, PTG Partnership is based on the ground floor of Willow House at Millennium Park in Osberstown. And the paperwork for its registration was presented at the time by Noelle Lalor, the company secretary of Osberstown Developments.

An Bord Pleanála is due to give its verdict on the Tipper Road development by February 27th.