Directors’ remuneration at subsidiary of US property firm rose 46 per cent to €1.3 million 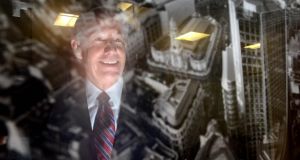 The 36 staff at a Dublin-based subsidiary of US property investment group Kennedy Wilson earned average remuneration of just more than €244,000 in 2015, according to accounts filed recently in the companies officer here.

Directors’ remuneration in the year rose by 46 per cent to €1.3 million.

The abridged accounts were signed off on November 14th last year and show Kennedy Wilson Europe Ltd had accumulated losses of €1.7 million by the end of 2015.

This was down from €2.8 million at the end of the previous year, indicating that the company made a profit in 2015. It closed the year with net liabilities of €138,353.

The accounts state that the company’s turnover is derived from real-estate management and acquisition services.

Staff at a UK subsidiary of Kennedy Wilson Ireland Ltd fared even better, receiving average remuneration of £491,200 in 2015, according to documents filed locally.

Kennedy Wilson has spent €1.2 billion acquiring a broad portfolio of multi-family, office, retail and hotel assets in Ireland through a variety of corporate structures since 2012.

This includes the Clancy Quay multi-family rental complex in Dublin, the Stillorgan Shopping Centre and the Shelbourne Hotel.

Many of these assets were acquired at significant discounts to the prices paid by their previous owners or the original face value of loans used to buy the assets.

In an interview with The Irish Times last year, Kennedy Wilson’s global chairman and chief executive, Bill McMorrow, bristled at the idea that it was a vulture fund.

“It would make me ill to my stomach if anybody thought that’s what we were about,” he said. “We’re all about building long-term businesses with fantastic people and becoming part of the country and the community.”

At the end of September 30th, 2016, two subsidiaries in Ireland of Kennedy-Wilson Holdings Inc, the US-listed parent company, had accumulated profits of $5.7 million, which it planned to “indefinitely reinvest” here.

If the earnings had been repatriated to the US, some $1.3 million in local taxes would have been due, the company said.