Daa to go ahead with business park at Dublin Airport 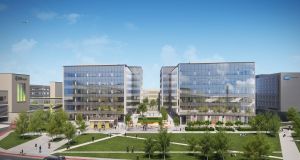 An Bord Pleanála has granted permission for the construction of four individual Grade A buildings.

Daa (formerly known as the Dublin Airport Authority) has secured planning permission for almost half a million sq ft of offices in a planned new 70-acre (28-hectare) business park at Dublin Airport.

Permission has also been granted for a new public space connected to Terminal 2. Daa originally set a long time frame for the business park but after the earlier than expected success with the redevelopment of the old Aer Lingus headquarters and its letting to ESB International, the State body decided to proceed with the new build element of Dublin Airport Central.

An Bord Pleanála has granted permission for the construction of four individual Grade A, six- and seven-storey head office style buildings with an overall capacity of 41,700sq m (448,854sq ft).

The first phase of the business park is expected to accommodate more than 4,000 employees.

Floor plates will be flexible, ranging in size from 1,450 to 1,856sq m (15,607 to 19,977sq ft) to allow companies to expand into larger space as they grow. Construction is expected to begin by early summer and to be completed by next summer. Up to 400 construction jobs will be created during the build phase.

Daa, which operates Dublin and Cork airports, is funding the initial phase of the development while the longer term funding strategy for the project has yet to be finalised.

John Heffernan, chief development officer with the daa, described Dublin Airport Central as one of the most anticipated new developments in the capital. “It will offer national and multinational companies an office environment of the highest quality with unrivalled connectivity within and outside Ireland and also, uniquely, the space for a business to significantly grow its operation in the same location.”

Dublin Airport Central is expected to appeal particularly to firms with a mobile workforce which travel abroad on a regular basis. It is also likely to be of particular interest to British firms considering relocating part of their business to Ireland due to the impact of Brexit on their operations.

Separately, daa is seeking expressions of interest for the development and operation of a four-star, 402-bedroom hotel linked in to Terminal 2. The bidder will build the hotel and operate it for a specified period before transferring its ownership to the daa.

The joint letting agents for the new office park are Bannon and BNP Paribas Real Estate.