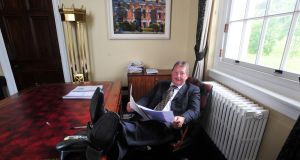 Northern Ireland’s former finance minister Sammy Wilson said that he respected Frank Cushnahan and still “counted him as a friend”.

Nama’s former Northern Ireland advisor, Frank Cushnahan, did a “sterling job” on behalf of the North, according to a former finance minister who maintains he was the right man for the job at the time.

Sammy Wilson, the DUP MP, has told the Stormont inquiry investigating the sale of Nama’s former Northern Ireland loan portfolio, Project Eagle, that he had put Mr Cushnahan’s name forward for Nama’s Northern Ireland advisory committee because he was the type of man who would “fight your corner”.

Mr Wilson said he had campaigned vigorously to secure a “Northern Ireland voice on a southern body” against the backdrop of a local property market in crisis.

He had wanted Nama to appoint a Northern Ireland board member but when he accepted this was not going to happen he put forward the names of three possible candidates for the Nama Northern Ireland advisory commitee.

Mr Cushnahan was subsequently selected and served three years with the committee from May 2010.

Mr Wilson said that he regularly discussed specific issues relating to Nama with Mr Cushnahan but that Mr Cushnahan “never crossed the line” and could not have used his position on the Nama committee to gain any financial benefit from the people he was dealing with in Northern Ireland.

He said it was well known that Nama’s Northern Ireland committee only provided advice to the agency on the economic background.

He believes that Northern Ireland subsequently got a “good deal” from the sale of the Nama assets to the American investment group Ceberus for £1.2 billion last April.

He told politicians at the Stormont inquiry, which he described as a “Mickey Mouse exercise”, that there was no way the sale of Nama’s Northern Ireland portfolio could have been a “corrupt sale”.

Mr Wilson said he had no knowledge of Mr Cushnahan’s business dealings.

He clashed angrily with the Sinn Féin councillor and inquiry member Máirtín Ó Muilleoir when Mr Ó Muilleoir suggested he had been “played like a violin” by Mr Cushnahan.

The former finance minister heatedly rejected this and also suggested there were certain facts that Mr Ó Muilleoir himself might not have disclosed to the Stormont inquiry – including his business relationship with Gareth Graham, a property developer and businessman who previously gave evidence to the inquiry.

1 Money matters: ‘My father embarrassed us with his haggling’
2 Opioid executive admits to ‘no morals’ ahead of prison term
3 Pilita Clark: When a rude boss keeps you waiting, why not walk out?
4 NI house builder apologises to Harry and Meghan over adverts
5 Comcast acquires Irish cloud-based telco Blueface
6 UK’s Henderson Park to seek €400m-plus for five prime Dubin office blocks
7 Blueface sold to Comcast, Dublin offices for sale, and NI builder’s royal blunder
8 Are there annual limits on inheritances or gifts to a child?
9 Inheritance tax rules where young grandson’s dad has died
10 Stocktake: Skyrocketing Tesla may drive ‘mother of all short squeezes’
Real news has value SUBSCRIBE