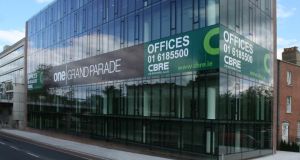 It was Credit Suisse’s second purchase since the property market collapsed. It previously bought La Touche House, one of the three buildings at the front of Dublin’s IFSC, for €35 million, a 57 per cent drop on the price paid for it by 62 Irish investors in 2002.

Joint selling agents CBRE and JLL had been quoting in excess of €16.4 million for One Grand Parade on the edge of the Grand Canal which is producing a rental income of €759,474. The ground floor with a surface area of 299sq m (3,218sq ft) is currently vacant.

The remainder of the building is occupied by Zendesk International Ltd, Oasis Global Management Co and the Kuwaiti embassy.

One Grand Parade was one of three office investments in the Tara Collection offered for sale by Nama. The highlight was the sale of two substantial office blocks rented by Facebook in Grand Canal Square in the south docks, which were sold to Union Investments, the investment division of the German DZ Bank, for €232 million.

Around the same time, Irish Life got good value when it bought Alexander House, an impressive office block in the Sweepstake area of Ballsbridge for €34 million. It will show a return of up to 7 per cent when it is refurbished.