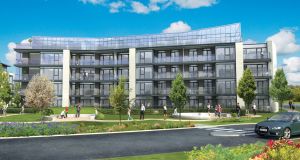 A real estate fund managed by Deutsche Bank subsidiary DWS has agreed to pay €108 million to acquire 214 apartments being developed by the Cosgrave Property Group in Dún Laoghaire, Co Dublin.

The sale of the apartments at the Fairways is the third major private rented sector (PRS) deal the Cosgraves have secured since 2016 at Cualanor and the neighbouring Honeypark scheme, which they are developing on the former Dún Laoghaire Golf Club lands.

The Fairways investment’s €108 million price tag equates to an average of €504,000 per unit, and a gross yield of 4.89 per cent. It also represents a significant premium on the €95 million price agent Hooke & MacDonald had been guiding when they brought the portfolio to the market last November.

The deal represents the second major transaction in the Irish investment market involving a fund managed by DWS. In June 2018 the German-headquartered investor acquired Westend Retail Park in Blanchardstown from Green Reit for €147.7 million. Coincidentally, the Dublin 15 scheme had been developed originally by the Cosgrave Property Group.

The apartments at the Fairways, meanwhile, are due for completion in stages between September 2019 and February 2020. Located at the centre of the Cualanor development on the Upper Glenegeary Road in Dún Laoghaire, the portfolio will be distributed across four five- and six-storey buildings, and comprise 214 apartments and penthouses over a basement car park.

The Cosgrave Property Group has led the market in recent years in the simultaneous development of large-scale apartment projects for both the private rented sector and owner occupation in Dublin.

In keeping with this twin-track strategy, the Cosgrave’s sale of the Fairways PRS portfolio follows on from its recent launch to the traditional owner-occupier market of 96 apartments at Eustace Court and 178 houses in Cualanor. The vast majority of these units have now been sold, mainly to owner occupiers.

And while the demand for new homes may be robust, David Cantwell of Hooke & MacDonald noted that the construction of the 214 apartments in the Fairways PRS portfolio would not have commenced were it not for the demand from Irish and international investment funds.

Upon completion, the Fairways will provide energy efficient apartments with an A rating, a concierge area and gym facilities, all of which complement the extensive amount of amenities which the Cosgrave Property Group has already provided across the wider Cualanor and Honeypark development.