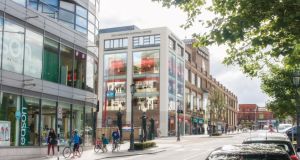 Dún Laoghaire Shopping Centre is planning a €10 million redevelopment in a bid to attract a new anchor tenant.

The centre’s owner, Coltard, is seeking planning permission to renovate the property to create two large anchor stores fronting on to the Dublin harbour town’s Marine Road and George’s Street. The work is estimated to cost €10 million and, if Dún Laoghaire-Rathdown County Council gives it the go-ahead, should be finished at some point in the second quarter of 2017.

Mr Miller said the centre is generating a profit but its backer believes it needs a new direction that will assist it in attracting more business at weekends.

Trade is strong between Monday and Friday, he said, but shoppers tend to go to other centres over the weekend. The addition of new anchor tenants is designed to counter this.

“It should result in more footfall and earn more money for the centre as a whole,” he said.

Mr Miller’s colleague, Robert Murphy, said the property received an extensive internal renovation in 2009 and described the current proposals as the final piece of the jigsaw.

Dún Laoghaire Shopping Centre has a yearly rent roll of €2 million. Grocery chain SuperValu currently anchors the property, while other tenants include New Look, Specsavers and Lifestyle Sports. Tesco Ireland, the local arm of the British retailer, has its Irish headquarters in a 40,000sq ft office above the centre.

1 ‘No demand... because there are no people’ at well-known Dublin pub
2 HSE says fix for Covid Tracker app rolled out to all Android users
3 Nearly 30,000 could lose pandemic payment if they do not confirm eligibility
4 Buying a second home now that we work from home
5 Shelbourne Hotel operator Marriott posts bigger-than-expected loss
6 Bank of Ireland does U-turn after refusal to reimburse ‘smishing’ victims
7 McDonald’s sues former CEO over alleged sexual relationships with employees
8 Face masks developed in Ireland could help meat-plant workers
9 ‘It’s not about beating the life out of a price for the sake of it’
10 F1 revenues almost wiped out by pandemic halt to races
Real news has value SUBSCRIBE