Building is 182,500 sq ft, making it the biggest available office of its kind in the capital, with rent expected to total €6 million a year 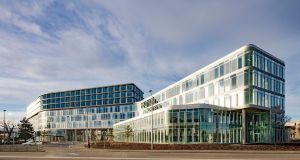 The new Seamark Building in Dublin, which developer Chartered Land expects to earn €6 million a year in rent when fully let.

Dublin’s biggest available office block is about to come on the market for a total rent of more than €6 million a year.

The building is 182,500 sq ft (16,955 sq m), making it the biggest available office of its kind in the capital, according to Chartered Land chief executive Andrew Gunne, who said it could be let to a single tenant or to several.

Chartered Land, which refurbished the building in partnership with US-based investor Starwood Capital, is aiming to let Seamark at about €35 per sq ft a year, a total of almost €6.4 million.

The rent is a discount of a little more than 40 per cent on the €60 per sq ft paid for offices in the central business district in Dublin city. However, property sources say that would be normal for a building in a location such as Merrion Gate.

Mr Gunne said yesterday that Seamark had space for 2,000 workers, which would bring the number of people employed in Elmpark Green to almost 5,000.

Facilities include an 8,300 sq ft gym and Chartered Land has just signed a lease with café chain, Art of Coffee, to take a premises in Elmpark. Mr Gunne noted that employers now have to make their offices as attractive as possible to potential staff.

Seamark also has a Leadership in Energy and Environmental Design platinum certificate, the highest award in the category. Mr Gunne said that this would help attract businesses concerned with their environmental impact and with corporate social responsibility.

Despite the uncertainty likely to follow the UK’s departure from the EU next month, and some industries reporting a slowdown in growth, Mr Gunne said that demand for offices in Dublin remained strong.

“Activity levels in some industries go down as they go up in others, the underlying fundamentals in the market are quite robust,” he added.

Mr Gunne argued that Facebook’s move to Ballsbridge, close to the Seamark Building, and the IDA’s success in luring more investment to the Republic, showed the commercial property market remained healthy.

1 ‘In Austin, there just seems to be something for everyone here’
2 Euro finance ministers agree €500bn package to address pandemic fallout
3 Lockdown exit: How can Irish economy reopen without big health risks?
4 Dutch go out on limb in fractious negotiations on aid for fellow EU states
5 Timeless tips and fresh perspectives for uncertain times
6 Eurobonds set aside as finance ministers broker compromise
7 TCD to spend €200,000 on Chinese student recruitment drive
8 Debenhams to shut all stores in Republic with loss of 2,000 jobs
9 Bank puts business owner on hold for month on Covid finance
10 Amazon fly dedicated aircraft into Belfast to fill online orders
Real news has value SUBSCRIBE