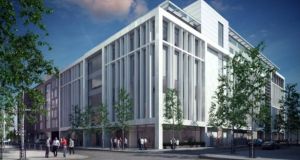 An artist’s impression of the rear of 5 Hanover Quay, part of the Strategic Development Zone in the docklands. The Oaktree venture secure approval to develop offices and apartments in the area last year

Listed Irish housebuilder Cairn Homes has acquired a site in Hanover Quay, Dublin 2 from a consortium involving Oaktree Capital, Nama and Bennett Construction, in a deal valued at €18 million.

The company has entered into a contract with a sub-fund of Targeted Investment Opportunities plc for the site, which is Cairn’s first acquisition in the South Dublin Docklands Strategic Development Zone.

Targeted Investment Opportunities is an umbrella fund of which Oaktree is the investment manager and Bennett is the asset advisor. TIO has been regulated by the Central Bank of Ireland since July 2013.

The Hanover Quay site, which is in close proximity to the ‘Silicon Docks’ area of the city, will allow for the development of more than 100 apartments. The acquisition is expected to be completed in early February. The site has existing planning permission and construction is expected to commence later this year.

Oaktree, which is the world’s largest distressed-debt investor, secured planning approval to develop offices and apartments in Dublin’s Docklands last April in a €450 million that also involves Nama and the Bennett Group.

The development comprises 42,500 square metres of offices and apartments at 5 Hanover Quay and 76 Sir John Rogerson’s Quay. The construction costs are estimated at €140 million with the project set to accommodate up to 2,400 workers and 158 apartments when fully developed. About 250 workers will be employed during the construction phase of the project, which is expected to have a value of €450 million on completion

Cairn raised over €400 million in new equity capital in its debut on the London Stock Exchange in June 2015 after placing 400,000,000 ordinary shares at €1 per share

The group was set up last year and is chaired by former KBC Bank Ireland boss John Reynolds. It was founded by Scottish accountant Alan McIntosh and Michael Stanley, the company’s chief executive.