Boulder-Hasbro has taken a 20-year lease of the building 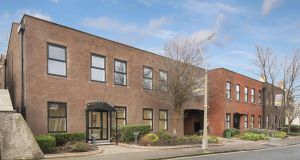 2-4 Claremount Road, Sandymount, Dublin 4. Boulder Media are relocating to the offices on site.

Boulder Media, the Irish animation business recently acquired by Hasbro Inc, is to relocate its Dublin-based studio to 2-4 Claremount Road, fronting on to Sandymount Green in Dublin 4.

The two-storey, 1,858sq m (20,000sq ft) building dating from 1980 was occupied by the Revenue Commissioners until the middle of 2016, when its owners, the Westmeath-based Bennett family and clients BCP Group, embarked on a major renovation of the block. Windows, doors and all building services were replaced and new insulation procedures were introduced, along with raised access floors. The building has 16 car parking spaces.

The new tenant apparently opted for the block because of the unusual availability of large floor plates, easy accessibility to the Dart and other public transport services and the pleasant village atmosphere in Sandymount.

Emma Murphy of HWBC acted for the landlords and Ronan Corbett of Cushman & Wakefield advised the tenant.

Former EBS offices sold for €9m
The former headquarters of the EBS Building Society at Townsend Street, Dublin 2, has been sold to a private fund for about €9 million. The 1980s building extends to 2,264sq m (24,370sq ft) and is located one block from George’s Quay in an area about to undergo major changes.

Although the building is in good condition generally, the new owner is still planning to upgrade it, according to Brown Corrigan Chartered Surveyors, which acted for the purchaser. High specification offices in Dublin 2 are now attracting rents in the order of €645 per sq m (€60 per sq ft).

Wicklow site with planning for nine houses for €750,000
A 13.4-acre residential site on a sloping hill overlooking Rathdrum, Co Wicklow, goes on sale today through CBRE at about €750,000. The site, located beside Rathdrum Bridge, has planning permission for nine two-storey detached houses, each of them extending to 192sq m

Robert Colleran of CBRE said he was expecting considerable interest in what was a “scenic, ready-to-go site of considerable appeal”.

“Click to Purchase” platform unveiled
Savills is aiming to speed up commercial and residential property transactions with the introduction of “Click to Purchase” – an agent operated online system for buying and selling property. The model originated in the UK and enables buyers and sellers to engage in private treaty, best bids and real time auctions from their desktops or on the go.

Traditionally, following the submission of an offer on a property, both buying and selling parties enter a “sale agreed” period, which can last anywhere between four and six weeks – or even longer – with no guaranteed commitments. Savills say the new platform removes the uncertainty, allowing contracts to be exchanged almost immediately by an acceptance by the agent of a clicktopurchase offer submitted by a buyer. Legally binding electronic signatures are attached to electronic contract notes. The platform, now widely used in the UK, has in many cases seen deals executed in as little as two days.

Angus Potterton, managing director of Savills Ireland, said: “The main impediment to embracing online property transactions has been the difficulties of creating a simple and accountable process which is legally compliant. Clicktopurchase provides this intelligent and easy-to-use online execution process which provides digitally signed documents which are tamper proof, verifiable and validated.”

Glenageary site of almost one acre for €2.7m
The walled garden of the former Glenageary House, at Park Court, Glenageary, Co Dublin, goes for sale today through Colliers International at a guide price of €2.7million. The site of 0.39 of a hectare (0.98 of an acre) located within the granite walls of the house demolished in the 1970s is zoned for a residential development. Richard Bielenberg of Colliers says the site has “fantastic potential” for an exclusive housing scheme, subject to planning permission. Glenageary is located 1 km south of Dún Laoghaire and 11 km south of Dublin city centre.

D4 offices for rent come with games room
Agents Bagnall Doyle MacMahon are quoting €485 per sq m (€45 per sq ft) for the rental of two of the three floors of offices close to the US embassy at 91 Pembroke Road, Dublin 4. The almost identical first and second floors, measuring 515sq m and 517sq m, are available by way of a subletting. The first floor contains a large canteen and a games room complete with sofas, pool table, ping-pong table and a bar.

CBRE is inviting offers over €5 million for a five-storey building with planning permission for use as offices and retail on the ground floor at 9-10 Fenian Street, Dublin 2. The existing block extending to 1,086 sq m is let to Hibernia College with a landlord break option in 2018. The planners have cleared the way for a redevelopment of the building to provide 2,244sq m of accommodation.

Sandyford offices for sale at €650,000
Savills is guiding €650,000 for an office suite in the six-storey Q House block in Sandyford, Co Dublin. The own-door Suite 106 extends to 244sq m (2,630sq ft) within the six-storey development and comes with gas-fired central heating, air conditioning and Cat53 cabling. The suite has five designated car parking spaces.