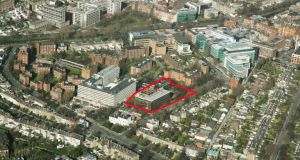 Wesley Rothwell of CBRE is quoting a guide price of €25 million for the 1980s Burlington House office block on Burlington Road.

The property is being sold on the instructions of Paul McCann of Grant Thornton, who was appointed receiver to McNamara’s company, Glasbay Ltd, by Bank of Scotland (Ireland).

Mr McCann was also receiver to the adjoining Burlington Hotel – now trading as the Double Tree by Hilton. It was bought by McNamara in 2007 for €288 million and sold at the end of 2012 for a mere €67 million.

The success in securing planning approval for a prestigious stand-alone headquarters building, or two distinct and separate blocks, designed by leading architects Henry J Lyons has added greatly to the value of the site.

Independent sources expect that the six-storey ready-to-go single block with 95 basement car-parking spaces should involve a “build cost” of €35-€38 million and an overall completion cost of at least €50 million.

The Z6 zoning for the site in the Dublin City Development Plan provides for “the creation and protection of enterprise and facilitate opportunities for employment creation”.

Offices on Burlington Road have been attracting a number of leading companies over the past year including Amazon, BSkyB, AdRoll and Jazz Pharmaceuticals.

The sale of the Burlington Road development site could not have been better timed because with the vacancy rate for Grade A office space in the city now at its lowest level in years, at under 4 per cent, it is only a matter of time before there is a general resumption in speculative office developments after a lapse of six years.

Developers and funds have been stressing the need for guarantees about future rents and lease terms. However it has fallen to communications billionaire Denis O’Brien to trigger the next round of office schemes by embarking on the redevelopment of Canada House on St Stephen’s Green and announcing that future rents will move up from €376 a sq m (€35 a sq ft) to at least €484 a sq m (€45 a sq ft).

Since then, the “experts” have been speculating on where the rents will end up both for new builds and for dated office blocks which have been refurbished.

There seems to be a consensus that landlords will be pushing for longer leases with few incentives. Such an outcome would obviously lead to difficulties for incoming IT companies which insist on shorter leases because of the often rapid growth of businesses.

1 Wetherspoon’s panto-villain chairman may have the last laugh
2 British exceptionalism backfires in style as Johnson tests positive for coronavirus
3 UK needs to be honest about its Covid-19 strategy
4 Retail landlords worried rents will dry up during Covid-19 crisis
5 Volkswagen burning through €2bn in cash per week
6 Will Covid-19 force Primark to rethink decision not to sell online?
7 Remote working doesn’t suit everyone, and it exposes woolly leadership
8 Mobile, broadband suppliers to be given extra radio spectrum
9 ECB orders banks to freeze dividends and share buybacks
10 Usit travel group in liquidation due to coronavirus crisis
Real news has value SUBSCRIBE