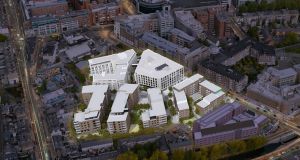 A view of the planned development Charlemont Square, in Dublin 2.

Online retailing giant Amazon is believed to be close to signing up for a significant amount of space at the 18,580sq m (200,000sq ft) Charlemont Square scheme being developed by the McGarrell Reilly Group as part of the Charlemont Street Regeneration Project in Dublin 2.

Savills, one of the agents said to be involved in the transaction, would not comment when asked, while JLL did not return calls. Developer Seán Reilly would also not be drawn on the issue when asked by The Irish Times.

However, property circles are abuzz with speculation that Amazon will sign soon for Charlemont Square. The deal is understood to be in “legals”, but how long these will take to complete is unclear.

Facebook’s large-scale letting in Ballsbridge last year – one of the worst-kept secrets in property circles – was tied up at this stage for many months.

News of a possible deal for Amazon at the €85 million Charlemont Square scheme, which will also include 263 new homes, first emerged last year, with a rumoured rent of €592 per sq m (€55 per sq ft) – a level that would be competitive when compared with the south docks, where rents are about €700 per sq m (€65 per sq ft) in places.

While Amazon’s likely letting is far from last year’s monster deal that will see Facebook quadruple its office footprint in the capital to 80,825sq m (870,000sq ft) with a move to Ballsbridge, it would still be a very large transaction.

It’s worth pointing out that the Facebook deal, the largest-ever office letting in the history of the Dublin market, was nearly three times the size of the next largest letting, when Microsoft agreed to take 27,871sq m (300,000sq ft) at South County Business Park in 2017.

Amazon is no stranger to large lettings in Dublin. In 2016 it completed legal contracts to rent the 15,922sq m (171,382sq ft) Vertium building beside the former Burlington Hotel – at the time this was by far the largest letting in the city for several years.

The company already employs more than 2,500 people in Ireland and announced plans last June to create another 1,000 jobs here over the next two years, with the majority of these at its subsidiary Amazon Web Services in Dublin.

These new jobs will be at Amazon’s Dublin sites in Blanchardstown, Tallaght, the city centre and north Co Dublin.

News of the possible Amazon letting comes at a time when the Dublin office occupier market is posting strong figures. A report from BNP Paribas Real Estate, prepared in conjunction with market analysts MSCI, says take-up in the sector surpassed 370,000sq m last year – an increase of 5.1 per cent year-on-year even as a significant quantum of new supply meant that rental growth moderated slightly again in 2018.

Rents are still 3 per cent below the peak recorded in 2008, according to the report, and the high proportion of pre-lets evident means the market is unlikely to see an oversupply of office stock any time soon.

Another review of Dublin’s office market, this time from Knight Frank, suggests Google, Facebook, Microsoft/LinkedIn and Amazon let 1,300,000 sq ft of office space last year – up 56 per cent on 2017.

1 Could your old car be giving away all your secrets to its new owner?
2 ‘The rental situation stops me moving back home’
3 Brexit: System agreed for Irish goods to skip checks on UK trade
4 Why are markets booming when a crash is on the way?
5 Stocktake: Playing poker with the day traders
6 David McCullagh announced as co-host of RTÉ Six One News
7 Former Worldspreads chief Conor Foley faces €730,000 fine
8 Ireland faces 'deep downturn' this year and may not rebound until 2024 if there is a second wave
9 Red tape logjam creates fear for Irish timber supply
10 Dublin-founded Future Finance agrees £100m debt facility
Real news has value SUBSCRIBE