All Hallows College on sale for €14m

Rosminians selling period buildings and land in Drumcondra for €9.5m 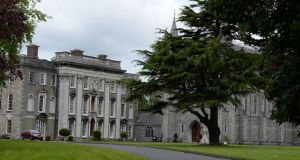 The Georgian Drumcondra House at the centre of All Hallows College. Photograph: Cyril Byrne

All Hallows College in Dublin’s Drumcondra, owned by a trust*, is for sale for over €14 million.

However its board is open to buying the 6.74 hectare (16.66 acre) site with lease-back arrangements or possible partnership proposals.

Meanwhile the Rosminian congregation is to sell its freehold interest in eight period buildings and outright ownership of 10 acres of development land at Grace Park Road in Drumcondra.

They are seeking more than €9.5 million for the complex which extends to 6.88 hectares (17 acres) and is opposite All Hallows College.

All Hallows is being sold through estate agent CBRE with WK Nowlan Property as advisers.

Wesley Rothwell of CBRE said the All Hallows site was “capable of delivering a substantial number of residential units not only through existing buildings but also on its lands”.

He suggested the site could be used as a student campus. In the context of current shortages of student accommodation “it would be an ideal opportunity to deliver a residential campus and/or educational campus”, he said.

As an academic institution, and a college of Dublin City University, All Hallows is in wind-down. Last May it announced it was to close and that no new students would be accepted for the 2014/15 academic year.

It has 260 remaining undergraduates while a redundancy programme is likely to reduce its 72 staff by 20.

Initially it was planned to auction the letters to raise funds but this was stopped following intervention by the Kennedy family and the discovery of Fr Leonard’s will in which he had left the letters to the Vincentian congregation not All Hallows.

Announcing the planned sale of the college its president Fr Patrick McDevitt said “ideally” they “would like to retain a presence on campus to continue aspects of its mission”.

The college intends, however, “to continue aspects of its mission whether on campus or elsewhere”, he said.

Estate agents Savills are acting for the Rosminians in the sale of their Drumcondra property.

The Rosminians were one of 18 religious congregations investigated by the Ryan Commission as it managed industrial schools at Ferryhouse in Tipperary and Upton in Cork.

They paid € 12 million to the controversial redress scheme set up under the 2002 indemnity agreement with the 18 congregations.

However, following publication of the Ryan report in May 2009, which recommended the 18 congregations pay half of redress costs incurred by the State in payments to former residents of the institutions, the Rosminians said they had no more money.

Such redress costs to the State stand at €1.46 billion.

1 Revised help-to-buy scheme for first-time buyers open for applications
2 ‘No demand... because there are no people’ at well-known Dublin pub
3 Divorce: What will it cost and can you afford it?
4 Post-Covid television starts to shape up – but with missing pieces
5 Management of Irish PR group Drury acquire agency from Omnicom
6 Apple received $250bn dividend from Irish subsidiary in 2019
7 Nearly 30,000 could lose pandemic payment if they do not confirm eligibility
8 Transferring the family farm without a tax headache
9 CityJet to exit examinership after High Court ruling
10 HSE says fix for Covid Tracker app rolled out to all Android users
Real news has value SUBSCRIBE