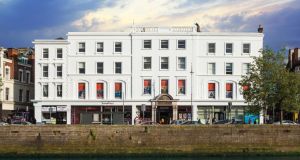 14-18 Aston Quay: SuperValu, Boots and Café Sol are locked in to 25-year leases, while Crunch Fitness has a 35-year lease. photograph: dave maloney

Clive Roche from that agency is quoting in excess of €8.75 million for the four business premises at 14-18 Aston Quay which offers new owners a net return of 8.04 per cent.

The parade of shops occupy the ground floor of a four-storey over basement period building which was redeveloped a decade ago by Garret Kelleher’s Shelbourne Developments.

He subsequently sold on 11 apartments in the upper floors as well as the retail units and the fitness centre. The three retailers are locked in to 25-year leases from 2004 while Crunch Fitness is trading on a 35-year lease.

The lettings are currently producing a rental income of €735,000, with 75 per cent of the income coming from SuperValu and Boots. The UK chemist chain only traded for a short period after signing the lease and is attempting to sub-let the premises.

Roche describes the investment as a “high-yielding, well-located landmark property generating significant long dated secure income.” He predicts that it will be of interest to both domestic and international investors.

The Aston Quay block traded from the early 1900s up to 1984 as McBirney’s department store and subsequently as the Virgin Megastore before it was acquired by Shelbourne Developments. It is one of the busiest stretches in the city centre.

1 Why is Germany suddenly embracing its inner Keynesian?
2 Passengers face queuing in car parks at Dublin Airport
3 Major credit union plans to limit savings accounts to €40,000
4 Prospect of foreign travel highlights remaining restrictions here
5 Brother is dragging his heels as executor of uncle’s will - is there anything I can do?
6 Tesco to cut emissions by converting waste food from Irish stores to gas
7 Land dispute between Citywest Hotel owner and neighbours before court
8 Tesla’s Elon Musk calls for breakup of Amazon in tweet
9 Domestic economy may get boost from multinationals
10 Avoca wins battle with Monkstown locals over cafe operation
Real news has value SUBSCRIBE