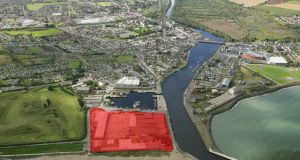 One of the best available waterfront sites beside Arklow Harbour in Co Wicklow has been sold for a fraction of the price paid for it just before the property crash.

The 5.2 hectares (12.92 acres) at South Quays, originally bought in 2007 by a local consortium known as Brattice Properties for €31 million, has just been sold to a local manufacturer for marginally over €3 million because of the absence of water and sewerage facilities on site.

Brattice Properties had apparently planned to develop a prestigious residential and commercial scheme overlooking the Avoca river as well as the Arklow Marina and the local golf club after paying a record land price to bathroom product manufacturer Qualceram Shires.

However, the planned scheme never got off the ground because of the restricted water and sewerage capacity in the area and with little prospect of a development getting under way, a receiver was appointed to sell on the site.

Estate agent Robert Colleran of CBRE did not have to look far for a buyer, selling the site to a local manufacturing company, Gains Europe Ltd, which produces and distributes vegetarian snacks for dogs. Gains, part of the international Rondo Foods group, had already been renting a manufacturing building on the same site and has since bought it from Nama for an undisclosed price.

The site is about 1km south of Bridgewater shopping centre which has just been sold to Goldman Sachs for €33.25 million – a long way from the €190 million reported to have been spent on it by the time it opened in 2007.