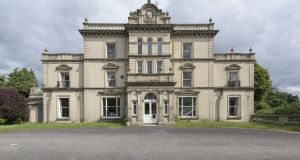 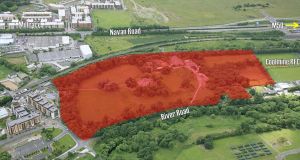 An aerial view of the Ashton Estate

A classical period house on almost 28 acres beside Ashtown railway station, which sold before the property crash for €26 million, is back on the market through CBRE for €2.8 million.

The property, which is off the Navan Road in Ashtown, Dublin 15, is likely to be bought for a nursing home.

Ashton House and Estate were sold in 2006 to Depton Ltd, a company linked to the late Liam Maye, a former shareholder in Castlethorn which developed Dundrum Town Centre.

Castlethorn also built a large number of apartments and a range of shopping facilities on an adjoining Ashtown site at the rear of the Halfway House bar and restaurant.

The current sale is being handled by Grant Thornton.

The latest valuation set by Robert Colleran of CBRE reflects the high-amenity zoning which applies to the property- “to protect and enhance high-amenity areas”.

He expects it to be of particular interest to nursing home operators who may also get planning approval for some houses.

The main house itself is a Victorian Italianate gem consisting of a three-storey main block with two-storey wings.

Both the main block and the wings have balustraded roof parapets.

The main block also has a central projection with a small segmental pediment and a pilastered and balustraded enclosed porch.

The house has been occupied continuously and has an overall floor area of about 600sq m (6,458sq ft) including 12 large bedrooms, a spacious diningroom, ballroom, kitchen and store rooms.

It was built in the late 1880s and remodelled later in a Palladian style to match the Archbishop’s House in Drumcondra.

The selling agent says it is in “reasonable condition” and retains most of its period features including decorative ceiling and coving, fireplaces and stained-glass windows.

The house was sold in 2006 by the Stone family. Previous owners included the Moore, Alexander and Neyland families.

The grounds have a four-bed lodge, a four-bed gate bungalow as well as a range of dog kennels, stables and a barn which are rented to Ashton Kennels and Stables.

Separately it has a one-acre walled garden that has been restored along with greenhouses.

The Ashton Estate overlooks the Tolka river valley and backs on to the Royal Canal.

It is a few minutes’ walk from Ashtown train station which forms part of the Maynooth line and, in the opposite direction, adjoins Coolmine Rugby Football Club grounds.

Elm Green Golf Club is about one mile away.

Mr Colleran said there was likely to be an opportunity to refurbish the main house and use it as either as a nursing home/village.

Alternatively, the estate could be developed into a hotel or tourism-related facility.

There is also potential to purchase another seven-acre site on the opposite side of the Grand Canal.