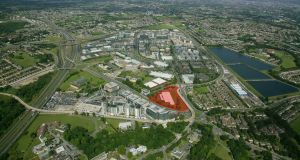 A standalone development site at the entrance to Sandyford Industrial Estate in south Dublin has been sold for €10 million – a full €100 million less than it made at the height of the property boom in 2006.

Green Reit is already developing a new 13,657sq m (147,000sq ft) office block in the adjoining Central Park which is due to be completed later this year.

The newly traded site was bought before the crash by John Lally’s Lalco development company and was only one of a number of land banks in the Sandyford area sold at that time for around €20 million an acre.

The Lalco site at 1.727 hectares (4.265 acres) was slightly smaller than the one it bought during the boom.

Over half an acre of the original five acres was sold in recent years to the Railway Procurement Agency to accommodate a section of the Green Luas line which runs along the boundary of the site.

Based on the newly negotiated €10 million selling price on top of the €16.5 million secured for the railway line, Lalco still endured a 91 per cent fall in valuation even before interest rates and transaction fees were taken into account.

This slippage was greater than the 87 per cent collapse in value experienced by developer Ray Grehan when he was forced to sell the €171.5 million 2.02-acres UCD veterinary college site in Ballsbridge for €22.5 million.

James Meagher of Knight Frank handled the most recent sale of the Sandyford land.