Four-storey over-basement office building is generating a rental income of €90,140 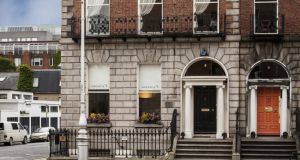 DTZ Sherry FitzGerald is expecting an early sale of a prime Georgian office investment on the eastern side of Fitzwilliam Place, at its junction with Cumberland Road, in Dublin 2.

The agency is guiding €1.8 million for the four-storey over-basement office building, which extends to 413.8sq m (4,454sq ft) and is generating a rental income of €90,140. The ground to third floors are occupied by Aircastle, an aviation leasing and sales specialist, on a lease of nine years and 11 months, from 2006, and at a rent of €77,740 per annum. The basement is rented by Wilton on a five-year lease, from 2011, at €12,400. Three car-parking spaces to the rear are accessed from Cumberland Road.

Clive Roche of DTZ described No 8 Fitzwilliam Place as “an exceptional Georgian property” offering significant reversionary potential. He said it was likely to interest both private investors and owner-occupiers.