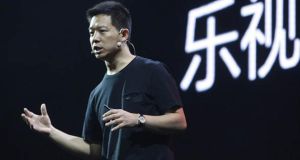 A Chinese IT billionaire is following in the footsteps of Tesla Motors chairman Elon Musk in seeking to build electric cars in the world’s largest auto market.

Jia Yueting, chairman and founder of Leshi Internet Information and Technology, said the maker of web-enabled televisions has spent the past year developing an electric car and will seek a licence to manufacture them in China. Leshi will bank on its experience “managing disruptive change” and is confident of surpassing Tesla in creating the most connected electric car, he said.

The 41-year-old’s ambitions to venture into electric cars come as China proposes to grant auto-manufacturing licences to companies other than car-makers to encourage innovation and create local challengers to Tesla, as part of a broader plan to cut air pollution, reduce dependence on imported oil and lead the global auto-industry.

“Leshi has been trying to diversify and it’s the CEO’s wish to become bigger and enter new industries,” Luke Xu, a Beijing-based analyst at iResearch, said.

“The government is encouraging the development of the electric- vehicle industry, and everybody sees an opportunity in the fast- developing market.”

Jia got his start in technology as a 22-year-old technical support officer maintaining the internal network of a county taxation bureau in China’s coal-producing Shanxi province.

He quit after less than a year to start a company providing consulting services to technology firms, before founding handset distributor Sinotel Technologies in 2002, taking it public five years later in Singapore, according to the company’s latest annual report.

Jia founded Leshi in 2004, and the Beijing-based company had its initial public offering in 2010 in Shenzhen. Leshi has a larger market value than Youku Tudou Inc, the New York-traded internet TV company, and Jia’s 44 per cent stake is worth about $2.3 billion (€1.85bn) at current market prices.

Wang Chuanfu, who founded BYD as a battery maker and was once China’s richest man, has spearheaded the company’s push into EVs with production of battery-powered buses in the US while its E6 electric car is used in taxi fleets.

The proposal to grant more manufacturing licences comes as China lags behind its own target for putting eco-friendly cars on the road, even as the government offers billions of dollars in subsidies and pledges to build charging stations for the public.

Companies should have more than three years of product research and development experience, have capability for vehicle design, and have auto-production capacity before applying for licences, according to a draft circulated for public comment.

Leshi’s internet-linked smart electric car will be “reasonably priced” and feature multiple touch screens that replace traditional consoles and dashboards, the company said in a press release. Users will be able to achieve unmanned driving, automatic parking, positioning and search functions powered by the company’s cloud platform, it said.

The company is in close contact with BAIC Motor about producing electric cars and is willing to co-operate with other traditional auto-makers, He Yi, chief executive of Leshi Internet of Vehicles, said. The company will seek to “redefine the auto industry” and is pursuing the venture to support China’s goal to clean up air quality.

“This is our dream and passion,” Jia said. “Look at China’s skies, all responsible corporate citizens want to do something about it. This is the truth.” – (Bloomberg)