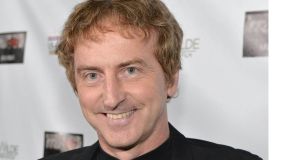 Sean O’Sullivan: is a key figure in a revolution in the manufacturing start-up scene, with capital, investors and entrepreneurs flowing into a city of nearly 15 million people 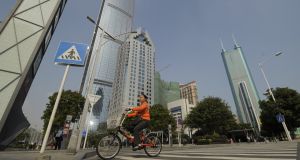 A cyclist crosses a road between skyscrapers in the southern Chinese city of Shenzhen. Photograph: PETER PARKS/AFP/Getty Images)

I’m in the Hax accelerator for manufacturing start-ups in Shenzhen, eating mealworms made by an Austrian company and trying to find my balance on a two-wheel personal transporter backed by Chinese telecoms and tech firm Xiaomi.

Down on the street below the accelerator’s space, Huaqiang Electronics World is packed with people buying components, while on the streets there are stands trying to lure new hires to companies in the city.

Not much evidence of a slowing Chinese economy here, but plenty of proof that the battle to achieve the Communist Party’s goal of transforming China from a low-cost manufacturing base into a high-value, innovative centre is being fought on the streets of this southern Chinese boomtown.

Shenzhen was where the late supreme leader Deng Xiaoping kick-started the country’s economic revival three and a half decades ago, and it’s barely taken a breath since.

Hax is backed by Sean O’Sullivan, the Irish-American entrepreneur familiar to many from the Dragon’s Den TV show; he has been a musician, a documentary filmmaker and founder of a humanitarian organisation in Iraq, and is credited with inventing the term “cloud computing”.

Now the Kinsale and Princeton-based O’Sullivan is a key figure in a revolution in the manufacturing start-up scene, with capital, investors and entrepreneurs flowing into a city of nearly 15 million people that less than four decades ago was a fishing village gazing sleepily across the heavily fortified border with Hong Kong.

In Hax’s loft, young start-ups are invited to work intensely on their prototypes before taking them around the globe to sell them to what appears to be an eager array of investors, with products ranging from robotic kits, medical devices, smart agri-tech and future food technology, which is where the high-protein mealworms come in.

“I’m sure any Irish start-up is already looking at Shenzhen. You can manufacture hardware anywhere in the world, but you would do it in Shenzhen to manufacture it at a price point your customers are going to care about. If you manufacture in Shenzhen, your prototype’s turnaround time will be much faster and much less expensive,” says O’Sullivan.

There are scores of incubators in Shenzhen, and the air is filled with the swishing of the wings of angel investors.

In 2014, venture capital investments in China’s tech sector more than doubled to $6 billion (€5.46 billion) from $2.8 billion (€2.55 billion) in 2013, according to Hong Kong-based AVCJ Research, from both foreign and domestic sources. Early-stage funding accounted for around one third of that and a big chunk of the money went to Shenzhen.

Shenzhen is succeeding where other regional giants are falling short, and by complementing Silicon Valley’s software offering, it is in a strategically enviable position.

Just down the street is PCH, the supply chain heavyweight which has earned founder and CEO Liam Casey the moniker Mr China.

“We’re very bullish on Shenzhen. Shenzhen is the place where you make products, but you have to know how to sell them,” says Casey.

PCH is cutting 250 jobs here as part of its efforts to realign its business in China, as it tries to reduce the need for the factory-level engineering services it previously provided in China and build on improved efficiencies in Shenzhen. The company was seeing a much higher level of engineering than in the past, cutting the sales conversion cycle from 18 months to three months.

“We hand it off to China at a much more advanced stage,” says Casey.

Casey supplies names like Apple, Xiaomi, Foxconn and Beats by Dr Dre, although he never discusses his clients.

He now ships goods worth over $10 billion (€9.1 billion) a year and had revenues last year of over €1 billion, employing 2,600 employees worldwide.

A recent big client is L’Oreal, for whom he is making a wearable skin sensor that can detect the levels of UV to which skin is exposed.

PCH can ship from China to most major markets within three days and Casey can help start-ups behave like big companies in other ways too, for example by allowing them to keep less inventory.

For Casey, the warehouses of the future will be the white-bodied bellies of airplanes.

“There’s no way you’ll ever have a product sitting in a warehouse for weeks, expecting it to sell,” he says.

Start-ups account for a very small amount of total products shipped for PCH, and it is traditional products for software companies and consumer products firms that make up most of its revenues.

But big players are attracted by the “start-up mentality” and Shenzhen is central to his idea of “making geography history” and bringing down the barriers for start-ups.

One of the projects Casey is particularly proud of is Drop, a connected kitchen scale with interactive recipe platform by Adaptics, which Dubliner Ben Harris co-founded in 2012 with Jonny McCauley, Jack Phelan and Tim Redfern.

After graduating PCH’s inaugural Highway1 accelerator programme, the Drop was launched in February 2014 at the Launch Festival in San Francisco, where it won the “best consumer product” award. Soon it was in Apple stores in America, Canada and the UK, as well as Target in the US, Lakeland in the UK and as far as Apple stores in Australia and New Zealand.

“Without a shadow of a doubt, I would say, if you’re making hardware, get out to China as quick as you can,” says Harris, whose company has headquarters in Dublin 8 and a satellite office in San Francisco.

What Shenzhen is about is marrying great software ideas with hardware, plain and simple. The internet of things. Drone software is only as good as the device it flies through the air, or a smart digital bicycle light needs to be made, and well made, to have a successful crowd-funded capital raise.

Google, Facebook and Apple are all getting into hardware. An idea isn’t enough anymore, you need the prototype, which is where Casey and O’Sullivan and their cohorts of young, scruffy geniuses in the lofts and offices of Shenzhen come in.

To keep its economy developing, China needs to innovate and the boom in manufacturing start-ups is a crucial element in the ambitions of president Xi Jinping.

“In general, the Chinese government seems highly solicitous of Western companies coming in and helping export business getting going. The government is easy to work with from the economic development perspective,” says O’Sullivan.

“We are manufacturing in China so we are the kind of company the government wants to see succeed. They have such incredible capabilities in China, in Shenzhen in particular, so we are leveraging the strengths. Any weaknesses are small compared to the strengths.”

1 ‘Saudi Arabia is where the opportunities will happen in future’
2 Trump’s TikTok move may have far-reaching consequences
3 Covid-19 has distracted us from the looming threat of Brexit
4 Data centres will force State to choose between climate and investment
5 MSD buys Takeda biologics plant in Dunboyne
6 Chris Johns: Digital equality must be moved up the priority list
7 He’s almost 82 but Larry Goodman has plenty of moves left
8 Starling resumes talks with Central Bank on banking licence
9 State’s biggest landlord records 30% rise in rental income
10 Irish tourism must also help itself to survive the pandemic
Real news has value SUBSCRIBE