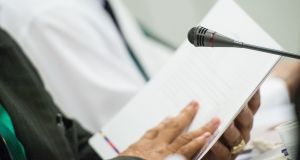 A poll of IoD’s 3,000 members found that 90 per cent of them back a temporary change to company law to allow for virtual agms. Photograph: iStock

The Government has been urged to temporarily amend company law so that virtual annual general meetings (agms) can be held, as many companies are unable to hold physical gatherings because of the Covid-19 crisis.

All companies are required to hold agms under company law, with the maximum time allowed between meetings set at 15 months. However, pandemic restrictions have made this difficult for many organisations. Some companies have sought ways around this by hosting agms via conference calls for example, while others have postponed such meetings.

The Institute of Directors (IoD) has said, however, that companies cannot continue to postpone meetings indefinitely as many need to be able to hold agms to ensure approval of annual accounts and other requirements. It has called for steps to be taken to promote the holding of virtual meetings with any decisions and motions carried during such agms to be declared legally binding and effective.

“Business leaders want to continue to run their businesses [while] meeting their legal and fiduciary duties, but the current crisis has created a particular issue around the physical holding of agms for many and for those who cannot under their own constitution have a virtual agm,” said chief executive Maura Quinn.

A poll of IoD’s 3,000 members found that 90 per cent of them support a temporary change to company law to allow for virtual agms. Close to a third of business leaders surveyed said their company’s constitution did not allow them to hold a virtual agm.