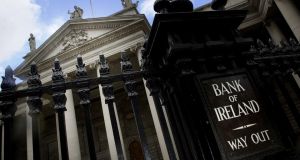 Bank of Ireland ATM and Visa Debit cards were not working for some customers on Monday. Photograph: Bryan O’Brien

The Bank of Ireland customer service Twitter account received numerous queries from customers on Monday claiming their visa debit card had been declined or that they unable to withdraw money from ATMs.

The Bank of Ireland Twitter account said: “Visa debit cards are now working ormally. We’d like to sincerely apologise for inconvenience some customers experienced this afternoon.”

Bank of Ireland’s stock was the worst hit by Brexit on the Irish stock market on Friday.

Bank of Ireland derives about 30 per cent of its earnings from the UK.

The bank’s share ended the day down nearly 21 per cent at 21.5 cents, having been down 25 per cent at one stage.