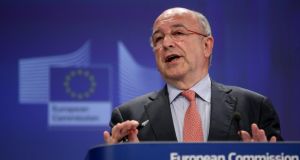 The Department of Finance has assembled a high-powered international legal team to fight the State’s corner following the European Commission’s decision to open a formal investigation into the corporate tax affairs in Ireland of the iPhone maker Apple. The Department has hired a senior UK barrister or QC (Queen’s Counsel), whom a source said is one of the “foremost authorities” on the tax practices of multinationals, to advise the Government, as well as an Irish-based senior counsel and a junior counsel. The Department declined to confirm the name of the UK expert it has hired.

The team has been built as the Government has pledged to “vigorously defend” its corporate tax regime following the European Commission’s decision to open the formal investigation.

Luxembourg and the Netherlands will also be investigated for tax rulings offered to Fiat and Starbucks in a bid by Brussels to clamp down on aggressive tax planning.

While the European Commission stressed that countries’ corporate tax rates were not under scrutiny, Competition Commissioner Joaquin Almunia suggested that the scope of the investigation could be extended to include other companies in Ireland.

“We are starting our work based on the information we receive and we will continue to request information as regards political cases,” the outgoing EU Commissioner said. Asked about Google, which has its European headquarters in Ireland, Mr Almunia said: “This is the beginning not the end of our work regarding how to enforce state aid rules, regarding the way tax systems are being used in particular with multinationals so I don’t exclude anything.”

However, sources in Dublin stressed that the fact that no other companies had been identified by the European Commission in its initial enquiry, which examined a number of tax rulings, meant that further investigations into transfer-pricing arrangements with other companies was unlikely.

In a strongly worded statement issued to international media yesterday, the Department of Finance said that Ireland was “confident that there is no state aid rule breach in this case and we will defend all aspects vigorously.” It signalled its intent to fight the ruling in the European Court of Justice should the commission find against the State.

The European Commission will now formally write to the Irish authorities who will then have a month to give their initial response, before a consultation period opens. While Irish authorities are hopeful the investigation could conclude within a year to 18 months, EU anti-trust cases can take years before reaching conclusion.

The move by Brussels to formally investigate the specific tax arrangements offered by countries to individual companies is part of a global move against aggressive tax planning by multi-nationals which has been gaining ground in the last two years.

Tax rulings given to two Apple subsidiaries in Ireland - Apple Sales International and Apple Operations Europe - will be investigated. Announcing the opening of the investigation yesterday in Brussels, the EU Competition Commissioner Joaquin Almunia said the Commission’s initial enquiry into Ireland’s tax arrangements with specific companies, had raised sufficient concern to initiate a full investigation.

“We have serious doubts about the compatibility of these three particular decisions with the EU treaty rules on state aid.[..] It is well known that some multi- nationals are using tax planning strategies to reduce their global tax burden,” the Spanish commissioner said.

While the power to set tax rates is the prerogative of member states, the European Commission’s competition division can investigate countries who are deemed to have given preferential tax advantages to certain companies or sectors. The European Commission confirmed that it had launched the initial investigation following media reports on the matter, widely believed to be last year’s much-publicised US senate hearings into the activities of Apple which heard that the company was paying a 2 per cent corporate tax rate in Ireland.