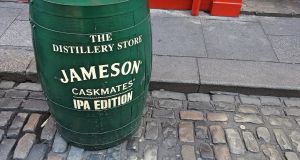 The new figures, which have been compiled by research company International Wine and Spirits Research (IWSR), show sales of premium-and-above priced whiskey such as the Redbreast brand, jumped 21.7 per cent year-on-year from 62.95 cases to 76.65 cases.

Industry experts welcomed the latest figures with Irish Distillers managing director for Ireland, Claire Tolan, describing it as evidence of a major turnaround for the category locally.

“It is great to see us growing in our domestic market because 10 years ago the Irish market wasn’t in great shape and whiskey was largely seen as being something that your dad drank,” she said.

“It was once considered sacrilegious to add in anything other than ice to the drink but I think the work that we and others have done to make whiskey more attractive to younger people through for example showing how Jameson mixes well with ginger and lime, has done a lot to encourage more people to try it,” Ms Tolan added.

Sales of Powers jumped 12.3 per cent to 82,000 cases to make it the third most popular whiskey brand at home, while Paddy and Teeling round out the top five with sales of 43,800 and 19,600 cases respectively. The latest figures show sales of Paddy slipped 14 per cent versus the prior year while Teeling was up 15 per cent.

Other notable sales increases included Tullamore Dew which jumped 43 per cent in volume terms to 13,800 cases, Kilbeggan, up 23 per cent to 12,000 cases, and Writers’ Tears, and Redbreast, which were up 21 per cent and 19 per cent respectively.

“While the growth in sales of Irish whiskey is a global phenomenon, it is very important that our home market continues to be so strong,” said William Lavelle, head of Ibec-affiliated Irish Whiskey Association, which represents the industry.