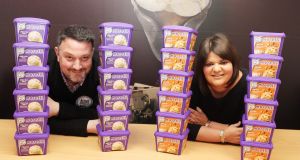 Arnaldo Morelli and Daniela Morelli-Kerr of Morelli’s, one of the North’s oldest ice-cream producers, which has launched a dairy-free, vegan-friendly ice cream.

Morelli, one of the North’s oldest ice-cream producers, has broken with tradition and for the first time in its 108-year history launched a dairy-free, vegan-friendly ice cream as summer officially begins.

The family-owned business developed its first dairy-free product because of a growing demand from customers for an alternative to its award-winning, traditional Italian ice cream.

According to Daniela Morelli-Kerr, sales and marketing director with Morelli, its new Libero range proved to be the “most challenging” product it has developed.

“We’ve been approached over many years for a dairy-free ice cream. We had, of course, to find a way of replacing the milk with ingredients that maintained the creaminess and flavour long associated with Morelli’s ice cream. We settled on a base of healthy coconut oil to replace the milk,” she said.

Chocolate and strawberry are the first two flavours to be launched in the Libero range but the company is planning to expand the range in the near future.

The Morelli family, synonymous with the seaside town of Portstewart, recently won the equivalent of the Oscars for ice cream when it carried off the national supreme champion award at the UK Ice Cream Alliance national ice cream competitions.

The family’s Portstewart ice cream parlour first opened in the 1920s. The business has survived, sometimes in the most difficult of circumstances.

During the second World War Arnaldo Morelli’s grandfather, Angelo, was arrested in Portstewart simply because he was Italian, and was interned in two prisoner camps, first in Lancashire and then on the Isle of Man, for more than six years. He returned to the town on his release to resume the business.

Morelli’s is now a fifth-generation business and it continues to import key raw materials from Italy to Northern Ireland. These are then combined with carefully-sourced local dairy produce. Double cream and butter from nearby Ballyrashane Creamery on the north coast, for example, is used to produce some of Morelli’s 50-plus flavours.

Managing director Arnaldo Morelli is happy that the company is still comfortable innovating in ice cream but is worried about the impact of a no-deal Brexit, particularly the impact of tariffs on those imports from Italy.

The family recently completed a £700,000 investment programme to expand its ice cream production and storage facilities at Coleraine. As well as producing ice cream for its own stores, the business also supplies supermarkets, franchisees and hundreds of retailers across the North.

And, over the last two years it has also been growing its exports to the Republic and currently has a contract to supply 29 Tesco stores across 15 counties in the Republic.