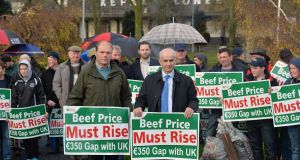 File image of IFA members protesting at beef prices. On left with green coat is Henry Burns, who is running as presidential candidate for the association. File photograph: Alan Betson/The Irish Times

Thousands of farmers begin voting tonight to elect the next president and deputy president of the Irish Farmers Association (IFA).

It had emerged Mr Smith was to receive a €2 million severance package as well as a €2.7 million pension deal.

On Tuesday, the IFA national returning officer Jer Bergin appealed to the association’s 75,501 members to use their vote.

“The IFA election is unique as it allows every member the chance to hear what candidates are offering, and then they have a vote in the national contest,” he said.

Tonight, 60 of the association’s 947 branches were to get voting under way in a contest that has presidential candidates Henry Burns, Joe Healy and Flor McCarthy vying for the top position.

Pat Farrell, Richard Kennedy and Nigel Renaghan are running for the office of deputy president.

A national count will take place in the Castleknock Hotel in Dublin on April 19th.

The president will take office immediately for a four-year term, with an agm scheduled for April 27th at the Irish Farm Centre.