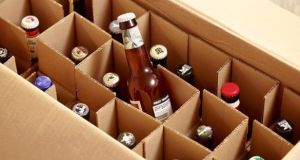 Of the 44 million hectolitres (7.74 billion pints) of beer sold in the UK during 2015, 51 per cent was sold in the off trade, which is dominated by large supermarkets, according to the British Beer and Pub Association (BBPA). The remaining 49 per cent was sold through pubs, clubs and other licensed premises.

Venues where drinkers can buy and consume beer have been steadily losing ground to supermarkets for many years. This is due to being unable to compete with aggressive promotions, especially on popular lager brands. In 2000, more than two-thirds of beer was drunk in pubs and other on-trade locations, while the figure was almost 80 per cent in 1990.

This weekend, Tesco was selling “slab” packs containing 18 cans of Stella Artois for £14, equivalent to about £1 a pint, while Asda was offering a similar multipack of 20 Carlsberg cans for £10, equivalent to 65p a pint.

As well as more drinkers opting to buy supermarket beer to drink at home, changing tastes in pubs and bars have also had an impact on beer sales in recent years. The popularity of wine has been steadily building, while cider and alcopops have fluctuated in and out of fashion, on each occasion taking market share from traditional beer choices.

Within pubs there have also been winners and losers among the different types of beers on tap. The BBPA figures were published on Monday in a new statistical handbook. This showed that draught lager still dominates, accounting for 27.9 per cent of UK beer sales last year, though this figure has fallen from 33.4 per cent a decade earlier.

Sales of cask ale have held up well, rising from 7.3per cent of all beer sales in 2010 to 8.2per cent five years later.

Overall, the amount of beer drunk in the UK last year was 44 million hectolitres and has remained close to that level for the last four years. Before that, beer consumption declined by more than 12 per cent between 2006 and 2009, due to factors including increased duty, the smoking ban in pubs and shrinking disposable incomes.

The number of pubs in Britain, however, has not stopped declining. There were just 50,800 public houses opening their doors last year, down from 58,200 a decade earlier.

The BBPA called on the chancellor, Philip Hammond, to repeat George Osborne’s surprise cut to beer duty three years ago to boost the pub trade. It said: “Duty is 54 per cent higher than it was in 2000, despite recent cuts. Much more work needs to be done to cut beer duty in the UK, still a staggering 14 times that of Germany.” – (Guardian)

1 Penneys will not reopen on Monday despite expected changes to lockdown rules
2 Angela Merkel sweeps in to save the euro zone
3 In six months we will be in the grip of a 1980s-style recession
4 Pandemic payment may be tapered based on previous earnings
5 Irish company MyBio to sell 10-minute Covid-19 antibody test
6 Don’t expect a bonanza for Ireland from the EU’s €750bn recovery cash
7 Biopharma company founder named EY World Entrepreneur of the Year
8 State’s tourism taskforce wants changes to school holidays to boost ‘staycations’
9 Should my mam wait for house prices to drop before buying?
10 Property price drop of up to 12% this year a ‘reasonable’ assumption – McDonagh
Real news has value SUBSCRIBE