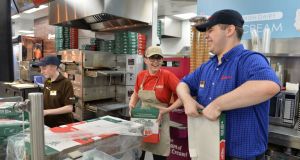 Supermac’s Holdings directly employed 1,720 staff in the year to whom it paid €34.6 million.

Supermac’s recorded profits of €23.7 million last year as its sales jumped to €172 million on the back of new openings, recently filed accounts show.

The accounts for Supermac’s Holdings Limited, which also incorporates the motorway service station chain and hotels controlled by Pat and Una McDonagh, show that revenue increased more than 9 per cent from €157.4 million in 2017.

Profit before tax, meanwhile, rose 8.7 per cent from €21.8 million the previous year.

Supermac’s Holdings directly employed 1,720 staff in the year to whom it paid €34.6 million. Directors Pat and Una McDonagh received remuneration of €151,417 between them. The group employs more than 4,000 staff across its 116 Supermac’s outlets, service stations and hotels, but the majority of its Supermac’s outlets are franchised.

Mr McDonagh, who founded Supermac’s in Ballinasloe in 1978, is owed €8.2 million by the company. He was also paid €789,104 during the year for the lease of a business premises owned by him.

The group paid off €3 million worth of loans during the year to end 2018 with bank borrowings of €11 million.

Supermac’s expansion has continued apace this year with its owners saying 300 extra jobs are to be created across Letterkenny, Longford, Ennis and Portlaoise.

In January, the fast-food group won a battle to force burger giant McDonald’s to relinquish its “Big Mac” trademark in Europe. The company said the judgment opened the door for expansion into the UK and Europe. McDonald’s has since appealed.

Dublin Port accounts for two-thirds of vessel arrivals, half of goods handled 11:14
Tullow shares rally as African oil veteran’s stake nears 10% 10:27
Britain after Brexit will not be alone, but it will be lonelier 10:17
Election 2020: Parties' pledges on housing simply don’t add up 09:45
First-time buyers drive growth in mortgage values and volumes 09:20