Stout believer in the Guinness brand 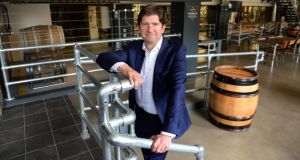 If anything could instil someone with the spirit of the Guinness brand then surely it must be spending time in the former private residence of its founder.

Oliver Loomes, the man now in charge of Diageo’s Irish operations, once had an office in what was Arthur Guinness’s bedroom. Despite having joined the company in 1999, he remains enthusiastic, if decidedly on-message, when talking about Guinness and its owner’s future prospects.

Settling down on a bar stool in the experimental Open Gate microbrewery at St James’s Gate, Loomes is happy to talk about new beers the company is working on. Looking across at a blackboard highlighting trial concoctions such as Strawberry Porter and Tropical IPA, which have been created under Guinness’s Brewers Project, he enthuses over them all. In doing so, he comes across as someone who may have drunk the Kool-Aid-flavoured stout.

“The Guinness brand is in very good health, probably better than it has been for many years both in Ireland and globally,” he says, smiling broadly.

Loomes, who took over as country director of Diageo’s Irish operations from David Smith nearly a year ago, should know. As the guy who led the Guinness 250th celebration in 2009 and the inaugural Arthur’s Day campaign the following year while serving as Diageo Ireland’s director of marketing and innovation, he has played a key role in shaping the way the black stuff is perceived both here and overseas. As global brand director for Guinness from March 2011 until last year, he oversaw marketing programmes across more than 130 countries worldwide.

New figures published yesterday show Guinness sales increased 4 per cent both here and globally for the year ending June 30th. This marks something of a rebound for the brand, which has struggled somewhat over the last few years.

The double whammy of a global downturn and changing consumer tastes had a big impact on Guinness and its owner with lower sales across Diageo’s wide-ranging drinks portfolio, which also includes Smirnoff, Baileys, Gordon’s and Johnnie Walker.

Guinness was among the brands worst affected, recording its first growth in six years in Ireland last year and with sales down elsewhere until recently.

Diageo, Guinness’s owner, and the world’s largest producer of spirits, has also returned to growth after two years of somewhat lacklustre results. This week it announced an operating profit growth of 3.5 per cent to £2.84 million (€3.37 million) for the last 12 months.

Loomes attributes the recent rise in Guinness sale locally to the success of its Brewers Project. The Open Gate brewery, which opened to the public last year to showcase experimental brews created by Guinness, is a key means by which the brand is fighting back as it seeks to combat the rise of craft beer and broader changes in drinking habits.

More than 7,000 people have visited the Open Gate brewery since it opened for visitors on Thursday and Friday evenings, with 12 trial beers having been made available to sample in the time since then.

Among the new beers to have emerged under the Brewers Project and to make it to market are Hop House 13, which now holds an almost 3 per cent share of lager sales in Ireland; West Indies Porter; and Nitro IPA, a product that has gone on sale in the US.

Loomes says other experimental concoctions will also likely make it out more beyond Open Gate as well.

“Open Gate is a great, dynamic way for us to check in with consumers on brews like Tropical IPA. We get instant feedback from the public and so far it’s all been overwhelming positive reaction. I would expect there to be many more beers coming through the Brewers Project,” he said.

There are those who are somewhat sniffy about Diageo’s seemingly newfound enthusiasm for experimentation. Indeed, some critics suggest it resembles an older man trying to fit in with his younger, cooler colleagues at the office. Loomes dismisses such this sort of criticism outright.

“What’s happening in beer is very exciting and reflects consumers’ changing palates. Much of thishas been driven by craft beer and it is great to see. I think it has brought a real dynamism to the category. However, innovation has been the beating heart of the Guinness brand going right back to Arthur Guinness’s time in 1759. We’ve had brilliant brewers all along and we have every right to play in this space and [can] bring excitement to the space,” he said.

Loomes is equally dismissive of claims the company has been less than accommodating to craft brewers seeking to get their products in bars that typically sell Diageo brands.

“I think there’s room for everyone and that this is about capitalising on consumer trends and a renaissance in beer. We’d never do anything to muscle out any smaller player,” he said.

According to Loomes, drinkers’ increasing search for authenticity chimes perfectly with Guinness.

“There’s change happening in both the retail environment and in pubs and it is now less about quantity and more about quality. Palates are changing and it’s very exciting but it also sets a new bar and demands that we respond to those changes. With these consumer trends we are well poised because we have all the heritage and authenticity they are looking for but also an ability to innovate,” he adds.

While the ability to create new beers is of great benefit to the company, it comes at a cost. Net sales of other beers brands such as Smithwicks, Budweiser and Carlsberg, the latter two of which are brewed under licence, fell 4 per cent last year. Some of this decline has been offset by the success of Hop House 13, which has taken a near 3 per cent share of the lager category in Ireland since its launch in early 2015. More broadly, Diageo is also gaining from a renaissance in spirits, with sales of gin, in particular, booming. Tanqueray sales grew 107 per cent in volume over the last year in Ireland, while Gordon’s, the category’s leader, was up 4 per cent.

Loomes argues that the latest results provide evidence that Diageo Ireland is bouncing back.

“If you go back, say, up to five years ago after the Celtic Tiger crash, the market was declining and we went through a number of tough years both at a macro and local level. I feel we have stabilised the business and now have rock-solid foundations and are looking to the future. We would have an unfettered ambition for what we can do with Diageo Ireland. There are lots of opportunities and we’re poised to move on into a growth phase,” he said.

While not a lifer (he previously spent nearly eight years working for Mars in the UK), Loomes is very much a company man. While amiable, he comes across as someone who has had perhaps a tad too much media training

An example of this is Loomes’s claim that his childhood ambition was to “get into the world of business and brands,” rather than be an astronaut, professional football player or other such career.

Like a good politician, he also spends time deflecting questions he doesn’t particularly want to answer, such as when asked about Arthur’s Day, an event that was initially well received but which later raised controversy due to suggestions it encouraged binge drinking.

“If you cast your mind back to 2009, things were tough here in Ireland and the programme was about promoting the pub and music and I think it was highly successful and is something I’m very proud of. Arthur’s Day was great at the time but it ran its course and we moved on to new growth drivers,” is all he’ll say on the programme, which was eventually scrapped in 2014.

He’s also wary of responding to the thorny issue of sponsorship and advertising, preferring instead to highlight the fact that alcohol consumption in Ireland has declined by 25 per cent in the last 15 years.

Nevertheless, there’s no mistaking the fact that when it comes to the company he remains as keenas when he started 17 years ago.

“I’ve loved the last year, it’s a dream job,” he says, talking about his most recent role. “This is a very vibrant environment and it is a brilliant place to build a career. There are a lot of Irish people who have worked here who are now working in very senior roles for Diageo around the world, including John O’Keefe, president of our operations in Africa, and John Kennedy, who looks after the Europe, Russia and Turkey region,” he adds.

In recent years there has been plenty of discussion about Diageo’s commitment to Ireland. Much of this has quietened down following the opening of a state-of-the-art distillery at St James’s Gate in September 2014.

“We’ve invested significantly in Ireland over the last few years. There’s the €169 million investment in the brewery but our total investment, including Open Gate, the Guinness Storehouse and so on, probably totals about €200 million. I think that is very much a vote of confidence in Ireland and we need to make sure the country remains a dynamic country for Diageo globally and a place that the company will want to continue to invest in going forward,” said Loomes.

Having helped the company get back on track, he is confident that Diageo has plenty more up its sleeves.

“It is exciting times and I want the team in Ireland to enjoy doing remarkable things together,” he says.

“We’re 237 years into a 9,000 year lease and we’ve a lot more beer to sell and a lot more to brew. I think we’re still very much at the beginning of the journey,” Loomes adds.

Studied: Loomes is a graduate of UCD and the Michael Smurfit Business School

Something you might expect: Loomes says there’s little more he enjoys than a quiet pint of Guinness with friends in a good local Irish bar

Something you might not expect: He began his career selling petfood