Souring milk market may drive many out of dairy 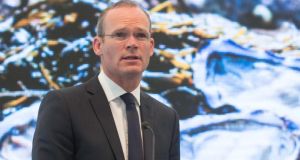 Minister for Agriculture Simon Coveney: Calls for an urgent increase in the EU intervention price for milk to avert a full-blown crisis in rural Ireland. Photograph: Darragh Kane.

Irish dairy farmers are bracing themselves for further falls in milk prices amid fears the current market slump may drive many out of the industry.

The ending of the EU’s long-standing quota system in April should have been a boon for Ireland’s under-achieving dairy sector.

However, it has coincided with the worst market crash in six years tied to an unexpected collapse in Chinese demand and to Russian import sanctions.

This week’s Global Dairy Trade auction, which sets the main reference price for products internationally, saw prices fall a further 10.6 per cent, having more than halved over the past year.

The latest official figures here put the average price per litre paid to farmers at 29.6 cent, down from 34 cents in January and 43 cents last year, making milk cheaper than bottled water in many supermarkets.

Farming industry body Teagasc estimates the average cost of production in Ireland is 25 cent a litre even before labour costs.

“There can be no doubt that softening of global dairy markets has had an impact on dairy farmers in Ireland and throughout the EU and the possibilities remain for this to continue,” he said.

This has put him at odds, however, with EU agricultural commissioner Phil Hogan, who wants to ween the sector off intervention and insists farmers must obey the “market signals” .

However, the Commission has agreed to extend the window for processors to sell into intervention beyond the original September 30th deadline.

ICMSA deputy president Pat McCormack said the industry was at a critical juncture in the cycle “where farmers are now actually losing money on every litre of milk that goes out the gate”.

He welcomed Mr Coveney’s acceptance that the previous “hands off” policy adopted by the Government was “simply unequal to the huge challenges now facing milk suppliers”.

New Zealand’s Fonterra – the world’s largest dairy exporter, employing more than 18,000 staff in 40 countries, announced this week it planned to cut 3 per cent of its workforce in response to the slump in prices.

1 Spare me the city-dweller’s longing for a rural idyll
2 ‘Darth Vader’ masks developed in Ireland can help meat-plant workers
3 Chris Johns: Digital equality must be moved up the priority list
4 Irish company insolvencies expected to spike near crisis level of 1,700 next year
5 Could Aer Lingus really go bust?
6 Food traceability company Identigen acquired by MSD
7 Nama picks Johnny Ronan and Colony to develop Irish Glass Bottle site
8 Bank of Ireland accepts that small is beautiful
9 Ireland v the rest of the world: Do we pay too much tax?
10 Wifi problems? Quick tips to get your home internet out of the slow lane
Real news has value SUBSCRIBE