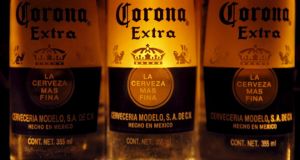 Anheuser-Busch InBev, the world’s biggest brewer, reported revenue that topped analysts’ estimates as sales of more expensive beers in emerging markets like China and Brazil offset a decline in the US revenue rose 6.2 per cent in the first quarter, excluding the impact of currency shifts and acquisitions, the Belgium-based company said Wednesday.

Analysts anticipated a 3.6 per cent advance. Earnings rose 11 per cent to $3.97 billion on the same basis.

The brewer is expanding in emerging markets to offset market-share declines at its flagship Budweiser brand in the US, where craft beers continue to lure drinkers away from mainstream suds.

AB InBev also faces weakening consumer sentiment and tough year-over-year comparisons in Brazil, which hosted soccer’s World Cup last year. Sales in that market and China were “impressive,” Philip Gorham, an analyst at Morningstar, said. “These are both premiumizing markets that should continue to drive growth for them,” he said by e-mail.

AB InBev rose 3.2 per cent to €108.2 in Brussels, pushing its gain this year to 15 per cent. The company’s global brands, which also include Corona and Stella Artois, reported “solid” volume growth of 4.6 per cent, AB InBev said, driven by Budweiser sales in China and Brazil.

Beer volumes in China rose 4.7 per cent, countering a broader decline in the nation’s beer market, thanks to a “very successful” Chinese New Year campaign, it said. Brazilian volumes rose 0.4 per cent, with sales rising more than 10 percent thanks to price increases. The introduction of Corona to Brazil, along with new lower-alcohol beverages, also boosted sales there, chief financial officer Felipe Dutra said in an interview. “We’re very pleased with our performance in Brazil,” he said. “The beer market is very resilient, even as people are under pressure in the short term.”

Globally, the volume of beverages sold declined 1.2 per cent in the quarter, hurt by a build-up of US inventory in the same period last year in advance of labor negotiations. Sales to wholesalers declined 6 per cent in that market, as both Budweiser and Bud Light lost market share.

1 Should my mam wait for house prices to drop before buying?
2 Two prominent business leaders in planning row with neighbour
3 Cheers: Conor McGregor's whiskey races up the sales chart
4 ‘I’m so lucky to be in the Caribbean – a million miles from Derry Girls’
5 Battle for control of America’s mammoth utility industry set to intensify
6 ‘The recovery needs to be a full-scale economic renewal’
7 ‘I have a talent for justifying purchases’
8 Joint accounts: if one of us dies, can the other access the money?
9 Military-style planning can help businesses battle Covid-19 survival threat
10 Coronavirus: Big majority ‘uncomfortable’ returning to everyday activities
Real news has value SUBSCRIBE