Bronagh Conlon will remain as managing director of Louth-based company 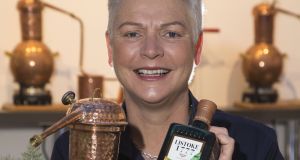 A co-founder of the Listoke Distillery has resolved High Court proceedings aimed at preventing her dismissal from the company.

The action was brought by businesswoman Bronagh Conlon, who arising out of the settlement, will remain in her role as the distillery’s managing director.

In July, Ms Conlon sued Co Louth-based Listoke Distillery Limited and sought an injunction preventing her dismissal after the company decided to terminate her position on notice.

She sought various orders, including preventing the company from appointing anyone else to act as its managing director and restraining her dismissal pending the final outcome of her action.

The company opposed her action. The matter was adjourned from time to time to facilitate out-of-court discussions, with Ms Conlon remaining in her role as managing director.

When the matter returned before the High Court on Thursday, Ms Justice Leonie Reynolds was told by Padraic Lyons, for Ms Conlon, the matter had been resolved between the parties.

Counsel said, on consent, the action could be struck out. No details of the settlement were revealed.

In earlier proceedings before the court last June, Ms Conlon had challenged her purported suspension as managing director.

She had sought an injunction lifting her suspension from duty and a declaration that her suspension, pending an investigation into the provenance of a shareholders’ agreement entered into in 2018, was invalid and not necessary.

The proceedings arising out of her suspension were resolved last July.

In a statement issued on Thursday through her solicitor Niall Clerkin after the proceedings had concluded, Ms Conlon said: “I am delighted that a satisfactory resolution has been agreed which enables the team to focus on the future development and success of Listoke Distillery and Gin School.

“I’d like to convey my huge thanks to Niall Clerkin of Clerkin Lynch for all his help, patience and excellent legal advice. I am also extremely grateful to Frank Harrington of Harrington International Corporate Finance for his financial advice, expertise and unstinting support. Finally, I’d like to acknowledge the wonderful support of all my family, customers, suppliers and the local community.”

Listoke Distillery, located at Tenure, Dunleer, produces the Listoke 1777 brand of Irish gin and operates a gin school. Following the outbreak of the Covid-19 pandemic, the business started to make hand sanitiser.