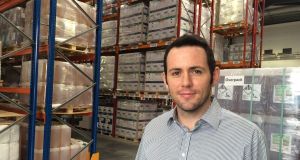 Simon Sheridan: profitability has improved, protecting the company against bad times in the future

Five colour-coded charts are grouped together on noticeboards throughout Barclay Chemicals manufacturing’s facility at Damastown in west Dublin. These dashboards, as the staff call them, outline the company’s objectives across a range of categories and they’re updated every month to reflect progress towards those goals.

They’re a relatively recent innovation for the 35-year-old company, which manufactures and supplies post-patent agrochemicals for protecting crops.

Things weren’t always done that way at Barclay: a big culture change happened first, and external events were the catalyst.

The agricultural sector is more affected by external factors like adverse weather or oversupply of grain, but in 2009 it stayed strong even while other parts of the economy faltered.

In Barclay’s case, however, there was a perceived shortage of glyphosate, the raw ingredient in one of its main crop protection products. The company’s 2009 revenues fell by 50 per cent on the previous year, and another difficult year followed in 2010.

Barclay’s then managing director Phil Sheridan was preparing to hand over to his son Simon, and he wanted to move the company away from a hierarchical culture to one with greater employee involvement. At the same time, the company saw the opportunity to implement a lean manufacturing system to improve efficiency that would also give workers a greater sense of ownership.

“We got longevity and experience from our staff. It added to the knowledge within the business,” he says.

At the same time, the company started learning about lean manufacturing through an Enterprise Ireland training programme. The lean philosophy involves people at all levels of a company contributing to ongoing improvements, which are measured and quantified.

IT manager Martine Denihan, who champions Barclay’s lean initiative, says the goal is to build an “adaptive” workforce. “We want to be a company where more people are involved in the decision-making process,” she says.

The visual dashboards were one result of that initiative and they help to give all 65 employees at Barclay a sense of what’s happening beyond their own department.

By looking at dashboards, anyone in the company can easily see improvements over time and how their own roles contribute to making that happen.

“Lots of the things we’ve implemented have hugely benefited the customer. They wanted traceability of raw material from the source through the barcode. We also conform to lot traceability in the shipping documents,” says Denihan.

Barclay exited several product lines during a phase of cutting back when trading conditions worsened, but it has since branched out into others and committed to investing in research. The company now allocates around 5 per cent of its turnover, or close to €3 million per year, towards R&D.

This is helping to diversify the business into herbicides and fungicides and avoid overdependence on glyphosate. It’s already working. In the past, glyphosate accounted for more than 70 per cent of Barclay’s sales; it now brings in less than 50 per cent of total annual income.

Denihan describes the turnaround in the company as a transformation. “You’re walking in to a different company to what was there five years ago,” she says. “It’s difficult to say if the lean programme had a direct effect on growing our revenue but it definitely enabled it to happen, rather than restricting it.”

Sheridan says profitability has improved, protecting the company against bad times in the future, which in turn gives staff a sense of security about their own futures.

The funds also give Barclay the means to keep investing in new products and in the site itself. In January 2015, the company completed an expansion of its production facility with a 1,300sq m warehouse.

It also gives Barclay scope to produce stock in advance and hold it on site, allowing it to respond quickly to customers who might need orders filled within short timeframes.

Sheridan says this flexibility gives the company an advantage compared to larger multinational competitors where orders typically need to be known far in advance.

“We can definitely be small and nimble in terms of reactivity,” says Sheridan. “We’re a big player in the glyphosate market and a lot of that is based on our ability to be reactive. That, for me, is good customer service.”