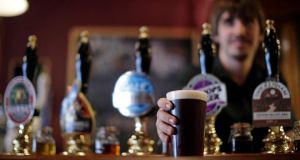 A JD Wetherspoon employee holds a pint of bitter beer. The company has purchased a former nightclub in Blanchardstown. Photo: Bloomberg

The company said it will invest more than €3 million developing the former Light Nightclub in Westend Shopping Park into a pub.

“We are delighted to have purchased our new property in Blanchardstown and to open it as a Wetherspoon pub in due course,” Wetherspoon chief executive John Hutson said.

The chain, which operates more than 900 outlets in Britain and Northern Ireland, opened its first pub in the Republic, the Three Tun Tavern, in Blackrock earlier this year.

Wetherspoon plans to open 30 outlets across the State and has secured pubs in Cork, and Dun Laoghaire and Swords, in Dublin.

Wetherspoon acquired the 40 Foot pub in Dun Laoghaire earlier this year, and will open a pub there next month. It also recently commenced the preparation for building works on its €1.5 million redevelopment of the Newport Café in Cork City.

The chain is operating its Irish bars without any Diageo-distributed products, such as draught Guinness, Budweiser, Carlsberg or Smithwicks, unless it negotiates lower prices from the brewer.

The company said it wanted to stock Diageo’s products, but it was unwilling to pay more for Guinness in Ireland than it did in Britain.

Initiatives such as menu improvements and longer opening hours, as well as new openings, helped revenue grow 10 per cent to £1.4 billion, with sales at pubs open over a year up 5.5 per cent.