Ireland ‘sleepwalking’ to fines for not meeting climate challenge 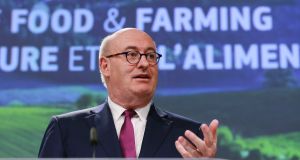 European Commissioner for Agriculture Phil Hogan: “Ireland needs to wake up, and fast, to the reality that we are part of an EU that has assumed the role of global leader in the climate challenge.” Photograph: EPA/Olivier Hoslet

Irish farming and food sectors need to address urgently “a gulf between rhetoric and operational reality” in reducing carbon emissions, according to the European Commissioner for Agriculture Phil Hogan.

In a blunt message on failure to reduce emissions and meet EU targets, Mr Hogan said the latest EPA figures on Irish emissions showing a 2.7 per cent increase in agricultural emissions last year were “sobering”. He warned that Ireland was sleepwalking to fines for not delivering on climate commitments.

“Ireland needs to wake up, and fast, to the reality that we are part of an EU that has assumed the role of global leader in the climate challenge.”

Mr Hogan was addressing a conference in Dublin to review the 10-year Food Wise 2025 strategy to rapidly expand Irish agriculture, which aims to provide an 85 per cent increase in annual food exports up to €19 billion and create 23,000 additional jobs in the farming and food sectors by 2025. Export growth is based on expansion in dairy, beef, seafood and “prepared food” and drinks sectors.

However, he said all in agriculture and food needed to “step up to the plate and deliver more when it comes to meeting the targets” in the Paris agreement on climate change and in achieving sustainable development goals.

Failure to reduce emissions went beyond farming; there was also a need to reduce dependence on fossil fuels and scale up adoption of renewable energy sources. “It’s little consolation that emissions are growing faster in the energy and transport sectors,” Mr Hogan said.

A failure to tackle the issue could cost the country large sums of money in relation to having to buy carbon credits by 2020, he added.

“And we are sleepwalking towards further EU fines under the renewable energy directive by our lack of investment in the energy grid,” he told the conference hosted by the Department of Agriculture, Food and the Marine.

He said the EU had adopted an ambitious environment and climate agenda. A revised Common Agricultural Policy (CAP), including a radical overhaul of “the delivery model for the agri-food sector’s green contribution”, was in response to this.

Mr Hogan said the risks of failing to address the environmental challenge for farmers and the food sector “are not abstract – they are real, and they can be counted in hard currency”.

Foodwise 2025 correctly recognised a significant increase in food production could not be considered in isolation from its environmental impact, particularly in relation to the depletion of natural resources and the potential impact on climate change.

“But there is a gulf between this welcome rhetoric and the operational reality. The EPA has warned that Ireland needs to adopt a much greater sense of urgency about reducing its dependence on fossil fuels after official figures showed a 3.5 per cent increase in greenhouse gas emissions last year.”

He said clear and measurable emissions targets would be built into new national CAP action plans, and failure to meet them would result in penalties. Withholding money where there was a lack of compliance would concentrate minds. Greater responsibility and accountability was being placed closer to the point of delivery and closer to the farmer and agri-business.

Mr Hogan said improved environmental performance at farm level, notably through nutrient management and enhanced use of “precision agriculture”, could make a difference. “The CAP will continue to incentivise farms to move in this direction.”

On carbon sequestration – the use of land to store emissions – he said Ireland needed to “reboot its afforestation policies and start making real headway in this area”.

Forestry represented a key sector in the transition towards a low-carbon and climate-friendly economy. Sustainable forestry strategies needed to be developed hand in hand with sustainable food security solutions. “This is as true for the rest of Europe as it is for Ireland, but I am making the point...to remind you that the day has gone where we can pay lip service to sustainability and climate action.”

He warned the EU does not exist just to provide an outlet for product for which a commercial market cannot be found. “If I am to be in the strongest possible position to defend the CAP, which currently amounts to €59 billion annually, I cannot enter the negotiations with 500,000 tonnes of skimmed milk powder in storage.”