Fyffes executives to share up to €3m bonus if deal happens 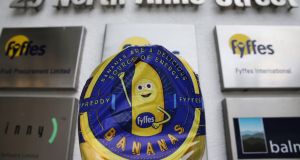 Fyffes headquarters in Dublin: certain managers in the company will be eligible for a 2017 bonus payment. This will be capped at €1.114 million for executive directors. Photograph: Brian Lawless/PA Wire

Fyffes’s executive directors are set to receive as much as €3 million in bonus payments next year under Japanese group Sumitomo Corporation’s planned €751 million takeover of the Irish fruit distributor.

A shareholder circular issued by Fyffes on Tuesday said that certain managers in the company will be eligible for a 2017 bonus payment in line with what they are set to receive this year. This will be capped at €1.114 million for executive directors, including executive chairman David McCann, chief operating officer Coen Bos and finance director Tom Murphy.

The executives will also be entitled to a maximum €1.114 million next year under a short-term incentive plan, if they stay with the company throughout 2017, and half of a €1.5 million one-off bonus that has been earmarked for certain staff on completion of the deal.

“Sumitomo has also agreed that Fyffes may write to a limited number of relevant employees in order to confirm the severance terms that would apply in the event that their employment were to be terminated within a limited period following the acquisition,” the document said.

Fyffes revealed on December 9th that it was recommending that shareholders accept the €2.25 per share offer for the company, which valued the stock at close to a 50 per cent premium to its closing price the previous day. The terms of the bid values the almost 12 stake of the McCann family, who have run the fruit company for decades, at about €87.5 million.

The circular relating to the deal said that shareholders are being called to an extraordinary general meeting in Dublin to vote on the deal. Sumitomo plans to execute the takeover through a unit called Swordus Ireland Holding Ltd.

In a letter to shareholders, issued with the circular, Mr McCann said: “Whilst the Fyffes board believes that Fyffes is in a strong position in its business development and continues to believe in the standalone prospects of the company, the acquisition represents an attractive premium in cash and crystallises the substantial long-term value potential of Fyffes today.”

Sumitomo has committed to retaining the existing Fyffes management structure after the deal and plans to work with the team “to grow and expand its various product offerings, expand into new geographies and accelerate the execution of its strategy”, he said.

Mr McCann told The Irish Times earlier this month that he will “stay for a period”, declining to elaborate.