PJ Rigney plans to produce a potato vodka, herbaceous gin and a range of liqueurs and handcrafted Irish whiskies 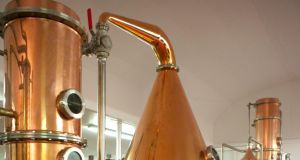 Copper stills at the new Drumshanbo distillery “The Shed”

The distillery, which will make “edgy” gin, vodka and whiskey, is set to open next Sunday, December 21st. Its first product to market could be a Black Forest gateaux-flavoured liqueur.

Mr Rigney has dubbed his distillery “The Shed” and he plans to produce a potato vodka, herbaceous gin and a range of liqueurs and handcrafted Irish whiskies mainly for the export market. At full capacity it will produce some 200,000 cases of spirits per annum and employ 10 staff.

It is owned by PJ Rigney Distillery and International Brands Ltd, and has got support from Enterprise Ireland. Mr Rigney hopes to have product available within six months.

He also previously worked for Baileys Irish Cream during the 1990s, handling the Americas and Australasia export markets, and later founded Sheridan’s liqueur, which sells more than 300,000 cases a year.

Mr Rigney is also hoping that “The Shed” will become a hub for tourism in Drumshanbo, attracting visitors to witness the skill of handcrafted distillation.

“My parents were both working in Drumshanbo when they first met …now we’re back.”