End of the road for Fyffes’ $1bn merger with Chiquita 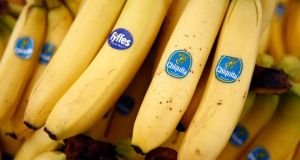 Fyffes, the Dublin-headquartered banana distributor, looks set to pick up a “break fee” of at least $23.5 million (€18.5 million) after shareholders of its US rival Chiquita Brands rebelled against its board and voted down a proposed $1 billion merger with the Irish company.

The deal has now been aborted, after Chiquita announced it had entered into buyout discussions with the Brazilian Cutrale and Safra groups, which won out after a 10-week battle to persuade Chiquita to abandon the Fyffes deal.

Chiquita’s board rejected three cash offers in that time from Cutrale-Safra, preferring instead to stick with the Fyffes deal. The merger was put to a vote of Chiquita shareholders in the US yesterday morning.

The Chiquita-Fyffes proposition failed to receive the simple majority required to empower the US company’s board to close the deal with Fyffes, and both companies announced the termination of the deal at about 2.30pm Irish time.

“While we are convinced they [Fyffes] would have been a strong merger partner, we will now go forward as competitors,” said Ed Lonergan, the chief executive of Chiquita, who would have chaired the proposed Chiquita-Fyffes.

The US company said it “expects to enter into discussions with the Cutrale-Safra Group regarding [their] revised offer to acquire all of the outstanding stock of Chiquita for $14.50 per share in cash”. This would value Chiquita at $682 million.

Fyffes reminded its shareholders that under the terms of its proposed merger, it “is entitled to a termination fee of 3.5 per cent of the total [market value] of Chiquita . . . should [it] enter into a separate transaction agreement within nine months”.

Fee calculation The break fee would be calculated on the value of Chiquita the day before it formally accepts any offer made by a rival bidder, such as Cutrale-Safra.

The Brazilians’ $682 million bid is due to lapse tomorrow, which suggests that if, as expected, Chiquita accepts the offer before then, Fyffes would receive 3.5 per cent of the US company’s Friday market value.

By late yesterday evening Irish time, its value was in the region of $670 million and rising steadily.

Market sources yesterday speculated that Cutrale-Safra’s decision on Thursday to up its cash offer by 50 cents to $14.50 a share was crucial in convincing Chiquita’s shareholders to scupper the merger. Its earlier bids of $14 and $13 had been rejected.

Sources said that following the increased bid and a decision by a leading shareholder advisory group ISS to withdraw a recommendation in favour of the merger, Chiquita proxy votes late on Thursday evening suggested the Chiquita-Fyffes deal had little hope of being passed.

The respective boards of Fyffes and Chiquita had fought hard to see off the Brazilians; the Irish company had even agreed to cede close to an extra 10 per cent of the merged entity to the US company to keep its shareholders onside.

The Fyffes share price dipped by more than 4 per cent in the half hour following the result of the vote. The Irish company, whose executive chairman David McCann was to have led the merged company, then cancelled a shareholders’ meeting it had scheduled for next Tuesday.

Patrick Higgins of Goodbody said Fyffes “remains a strong business. It continues to build on its market leading position in European bananas and [its last set of results] saw a marked pick-up in profitability in its melon and pineapples business. The balance sheet also remains robust.”