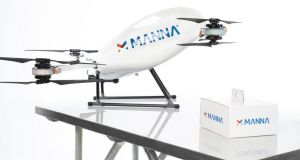 Manna has raised further funds from investors, including Greenman.

Greenman Investments, a property investment firm and asset manager with its headquarters in Dublin, has made its first foray into the tech sector after backing Irish drone delivery start-up Manna in a new funding round.

Existing investors including Dynamo Ventures, Elkstone and Frontline Ventures, have also participated in the round, the value of which has not been disclosed.

As part of the deal, Greenman is to partner with the start-up via its Open real estate fund to put together a pilot programme offering delivery services next year, in what will be the first trial of Manna’s technology in mainland Europe.

Greenman, which has €850 million of assets under management, said it intended to make further investments in tech businesses that were operating in the food retail space.

“This is an exciting investment for Greenman, particularly as it is our first in the technology space. We believe that technology companies and platforms such as Manna have the potential to be at the cutting edge of the future grocery delivery model and are delighted to be partnering with them as they begin this journey,” said Ronayne O’Mahony, director of expansion, Greenman.

Currently, 0.5 per cent of all grocery transactions in Germany take place in a Greenman Open-owned store, which Mr O’Mahony said meant Greenman was “well placed to prepare and plan for the future and become a leading voice in the discussion on the future of grocery retail in Europe”.

Founded by tech entrepreneur Bobby Healy, Manna’s drone service was originally conceived as a way to deliver to customers quickly and easily, with the company focusing its trials on restaurants. Its drones can travel at speeds of up to 80km/h.

The company had been preparing for a test of its service in April, but the pandemic delayed matters. The start-up had intended to pilot a takeaway food delivery service on the campus of University College Dublin in March, with drones delivering food directly to students and lecturers, and had signed up takeaway service Just Eat and restaurant Camile Thai as its first commercial partners.

However, the Covid crisis had led the start-up to revamp its plans. This week it announced it had signed up Tesco for a new trial to deliver groceries by drones in Oranmore, Co Galway.

“Getting Greeman on board is a great endorsement of our plans for Europe and I’m delighted to have them join us as a backer,” Mr Healy said.

The Irish Aviation Authority (IAA) has yet to give the go-ahead for Manna to launch its services widely but the company is in talks with it and with regulators in other jurisdictions.